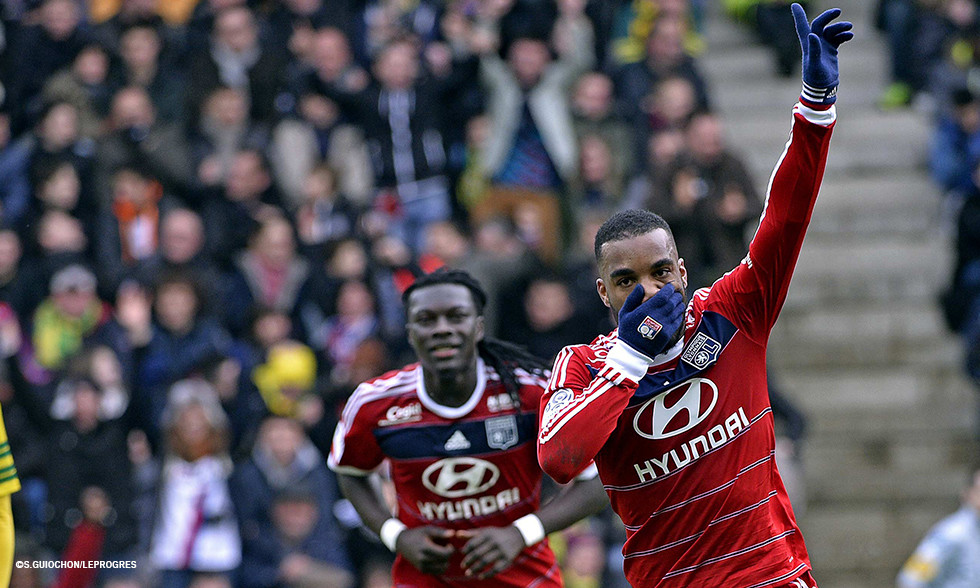 OL recorded a 2-1 victory away to Nantes. Despite a tough game and a very tense finale, Les Lyonnais brought back three precious points from the North West. The Lacazette-Gomis partnership struck again with each getting on the scoresheet. Anthony Lopes was excellent in the OL goal.

Lille, Marseille, Reims...All the candidates for the third place, except Saint-Etienne, all won in Week 24. To maintain the rhythm, Les Lyonnais needed to do likewise on Sunday afternoon against Nantes. Against a Nantes side that hadn't won in a month, Rémi Garde, in his 100th match on a Ligue 1 bench, welcomed back Gourcuff and Umtiti and had a full strength squad to call upon, with the exception of the injured Miguel Lopes. He stuck with his now tried and true diamond shaped 4-4-2.

The home side showed plenty of desire…Touré, unmarked in the box, had time to control and shoot... wide. Fortunately for an OL side that struggled to get going and lost a lot of ball with loose passes. Gakpé served Veretout with a throughball. Anthony Lopes was late coming out but the Nantes playmaker miscontrolled. Bessat was then denied by a diving save. Grenier, from a difficult angle, tried to lift the ball over Riou. Without success. There was more panic in the OL defence and Gourcuff was struggling with a groin strain.

Gakpé volleyed wide from a Bisevac clearing header. Nantes had another chance but Lopes was alert to the danger. OL struggled to find solutions in attack. And yet… in the 41th, Bedimo switched play to Grenier, who crossed for Gomis. Riou saved, but Lacazette followed up to blast the ball home. Despite struggling at the back, OL headed to the half-time break with a 1-0 lead.

Bisevac, who was struggling with a knock, was replaced by Koné at the break. Gourcuff played on through the pain barrier. The match struggled to find its rhythm. From a long-range free-kick, Lopes misjudged the flight of the ball, but still managed to produce a fingertip save. Les Lyonnais were forced back into their own half of the field. Bedimo broke down the left and crossed for Gomis, who couldn't get a telling touch. Gourcuff, was replaced by Ferri. Grenier then controlled and shot... over. Les Lyonnais stood firm and offered very few chances to their opponents.

…but refused to cede ground.

After a superb drag back that eliminated two opponents, Grenier found Gomis who turned and shot straight at Riou. But in the 76th minute, the Nantes 'keeper brought down Lacazette in the area. Gomis tucked away the penalty. In the 84th, Djordjevic took advantage of a poor Umtiti clearance to bury the ball into the back of the net. Nantes were back in the hunt. Djordjevic was sent off for a threatening gesture towards the referee. Les Nantais continued to come forward in search of a late equaliser. But they lost their nerves. There was one last chance for the locals… But in vain. Les Lyonnais held on to win 2-1.