OL continue to rule the derby! 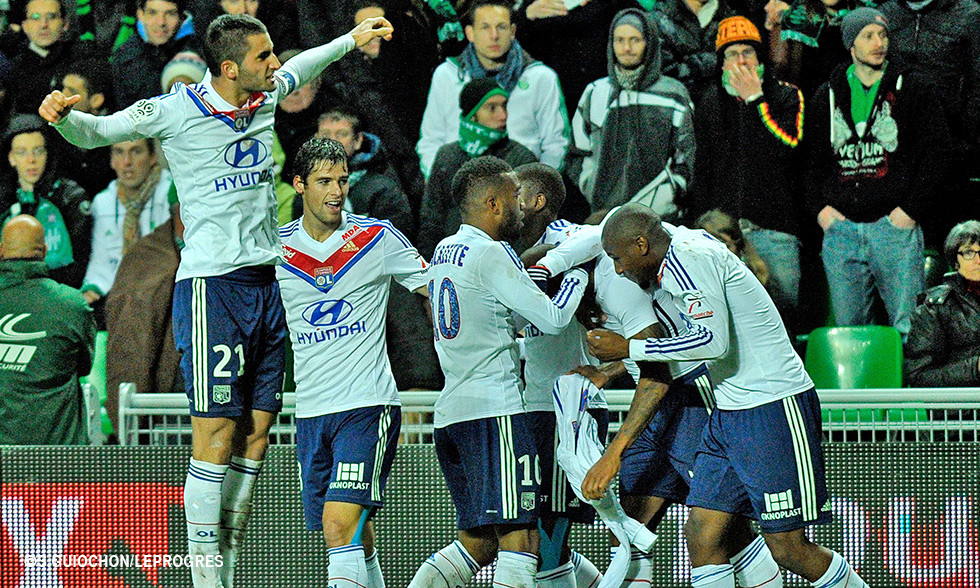 OL took out the derby thanks to a last-gasp 2-1 victory. It was a sixth consecutive win away to Saint-Etienne, that saw Les Lyonnais leap up to seventh in the standings. The perfect end to the evening.

There was plenty at stake in this 107th Rhone derby… OL were looking to continue their charge up the L1 ladder. To build on their current good form they faced a perilous trip to their near-neighbours, even if they hadn't lost at the Stade Geoffroy Guichard since 1994. Despite a poor start to the season, they had the opportunity to climb eight places, up to seventh, if they could net all three points. To do that, Rémi Garde decided to stick with the 4-4-2 formation, with a diamond midfield with Gonalons, Fofana, Malbranque and Grenier. Umtiti and Bisevac played in central defence while Gorgelin made his first start between the posts.

Les Stéphanois and Clerc fired the first shot in anger after just a minute, but the effort was off target. The tackles were flying in early... Clerc wasn't far from picking up a red card... Intesity was high, but accuracy was low on both sides… Brandao completely missed his header... After 25 minutes, the game was still awaiting its first shot on target and Les Lyonnais were struggling to find a way through.

A dour first half

Grenier hit the first shot on target, but it failed to test Ruffier. There was little to get excited about in the first half with neither side willing to take risks and open up the space. From a corner, Bisevac miss-hit his opening. It was scoreless at the break.

Lacazette stuns the Chaudron…Hamouma reignites it

Just two minutes after the restart, Bedimo crossed for Gomis, whose header forced Ruffier to spill the ball and Lacazette followed up to fire OL in front. The match sparked into life. Gorgelin made a string of saves. Lacazette's goal had woken up the home side, led by an untenable Corgnet. From a cross in the 65th minute, the OL defence hesitated and Hamouma sent his overhead kick into the back of the net. ASSE were level.

OL claim it on the line

The pressure continued to build inside the Cauldron. Gradel drove into the area and shot... saved by Gorgelin. Cohade then crossed for Perrin who hit the crossbar. ASSE were a changed side. Clerc stung the palms of Gorgelin. OL weathered the storm. Diomandé tried his luck from distance when he had other options. There were ten minutes to play and OL were hanging in there. Lacazette headed down for Briand whose shot brought a fingertip save from Ruffier. In the last second of injury time, Gourcuff crossed for Briand, who sent his header flying inside the post! OL won in a thriller and are undefeated in 15 consecutive matches in Le Chaudron.