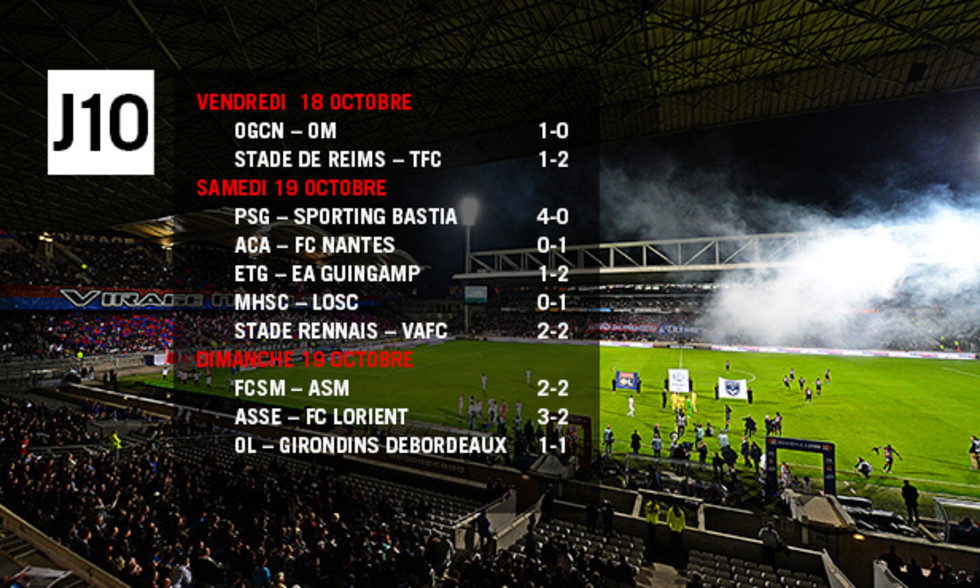 28 were scored during Week 10, including four from a Paris Saint-Germain side really hitting their stride, while Monaco slipped up at Sochaux. Marseille lost again while Lyon still can't win...

Paris turn on the style…Ibrahimovic and Cavani both netted doubles as Paris gave Bastia a lesson 4-0. Les Parisiens are unbeaten in L1 for seven and a half months. The wins sends them top of the table.

Yes, Monaco knocked off top spot… a second draw in three games, after being held by Reims, this time it was a 2-2 draw with Sochaux that saw Les Monégasques drop another two points. For Les Lionceaux, Hervé Renard, in his first match on a Ligue 1 bench produced a stirring comeback from his side.

René Girard victorious against his former club…Thanks to a 1-0 win over Montpellier, Lille continue their excellent run. They have made their best start to a season since the 2004-2005 season.

OL dig deep to salvage draw… Against Bordeaux, Les Lyonnais were a goal down and then a man down... but with their backs to the wall, the managed to muster the necessary strength to equalize in stoppage time at the end of the match and avoid a fifth defeat of the campaign...

The Derby d'Azur goes Nice's way…Courtesy of their 1-0 win over OM, Nice maintained their 100% record at the Allianz Riviera, with three wins in as many matches and three clean sheets to boot! Nice rejoin Marseille in the standings while OM suffered a third consecutive defeat in all competitions.

Nantes on cloud nine…Les Canaris made it four in a row last weekend against Ajaccio, with a 1-0 win. The last time they recorded for consecutive Ligue 1 victories was back in November 2002. Promoted Nantes are just one point outside the top three.

Brandao and victory return to Saint-Etienne… Les Verts hadn't won for four matches (3 defeats). Against Lorient, they returned to the winners' circle 3-2. They are back within three points of the top three. Les Merlus, for their part, suffered a fourth straight loss and remain in the relegation zone.

Rennes were held 2-2 by bottom club Valenciennes, while promoted Guingamp recorded their first away win of the campaign away to Evian (2-1)…that win sees them move into the top half of the table. Toulouse continued their climb up the ladder thanks to a 2-1 win away to a Reims side that were undefeated in their eight previous matches.