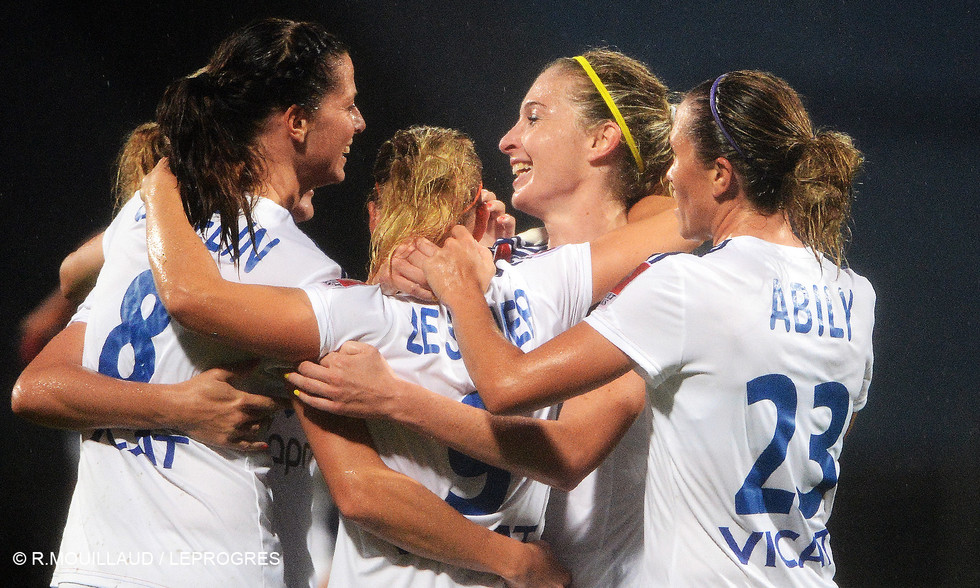 In the first massive clash of the season, Olympique Lyonnais recorded a comfortable 3-0 win over Juvisy at the Stade de Gerland with superb goals to Schellin, Tonazzi and Le Sommer, as the defending champions move straight to the top of the first division standings...

Matches between OL and Juvisy are the traditional heavyweight matches of the French season and this one came early this year in the second week of the campaign. On the opening day of the season, both Lyon and Juvisy registered big 4-0 wins. The winner of this match would almost certainly inherit top spot on the ladder.

In driving rain, Les Lyonnaises kick-off. Bouhaddi was called into action early to turn away a dangerous Juvisy cross. OL controlled possession in the early stages, but were unable to carve out a clear-cut chance. Juvisy had the first corner but it came to nothing. Les Lyonnaises lacked the final ball to make the difference, like from Dickenmann's cross. The rain stopped but the pitch remained slick and difficult. Thomis used her pace to break to down the right before cutting the ball back for Schelin, whose shot was deflected behind for a corner. Renard sent her header wide from the resulting set piece.

OL began to tighten their grasp on proceedings and laid siege to Deville's goal. Necib was pulling strings in midfield without finding the breakthrough. In the 32nd minute, Kumagai's sublime cross-field pass released Dickenmann down the right wing. Her low cross was met by Schelin, whose inspired backheel finish opened the scoring. In the 39th minute, Thomis went off with an injury. Necib's free-kicks were a constant source of danger for Juvisy, but her teammates just couldn't take full advantage. OL kept growing stronger and stronger as the half wore on and were deserved 1-0 leaders at the break.

The first chance of the second period fell the way of the visitors but Bouhaddi didn't need to make a save. Then the rains came again at the Stade de Gerland. OL doubled their advantage with a brilliant volley from  Tonazzi, after a perfect cross from Abily. Lyon's third goal was just as beautiful as the two that had preceded it. Le Sommer sent a 30m missile flying into the top corner of the Juvisy goal. OL then controlled the remainder of the match, even if Juvisy went close to pulling a goal back on the counter. It was a rare moment of danger from the away side as the referee blew for full time.

OL did the damage in a brilliant first hour and their domination was punctuated by three magnificent goals. Their record after two matches, is perfect, with two wins from two and seven goals scored, none conceded. OL have hit the ground running and now move top of the ladder...