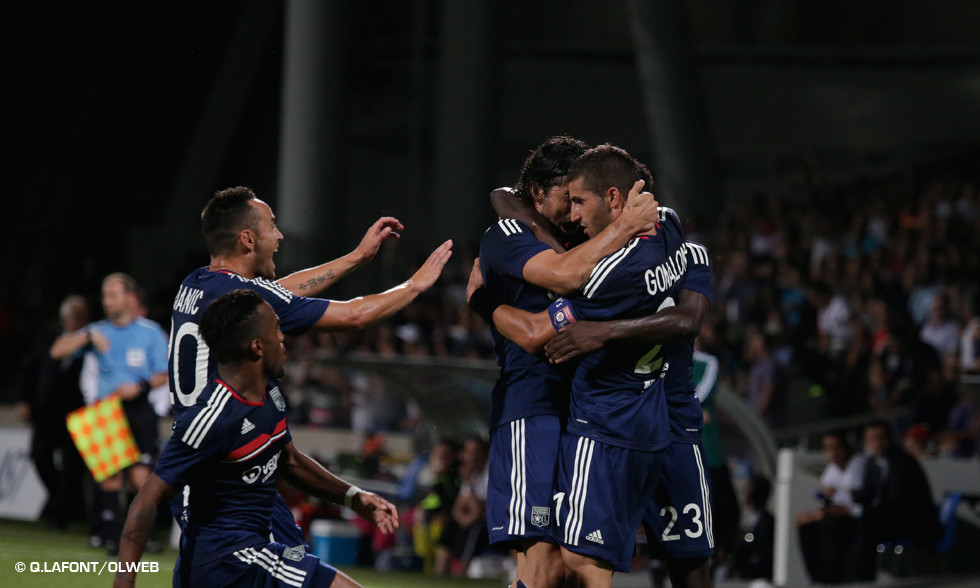 After four friendly matches without defeat, Olympique Lyonnais' season officially started on Tuesday with crucial fixture. Last season's third-place finish in Ligue 1 means the club must win through two qualifying rounds to gain access to the group phase of the Champions League. The first leg of the third preliminary round is the first step against last season's runners-up in the Swiss league: Grasshoppers of Zurich. In hosting the first leg, OL had to do the business to avoid chasing the game in Switzerland in a week's time. Rémi Garde went with the same starting XI from the two previous friendly outings, with the exception of Fofana, replaced by Umtiti in central defence.

The Stade Gerland may not have been full to capacity but the supporters' chants rang out around the ground. The opening exchanges were an intense midfield battle with no-one afforded any time on the ball. With 13 minutes on the clock came the first real chance of the match. There was two of panic in the OL penalty box, during which Lang, with a superb control and shot, hit the post! From a Dabo cross, Lacazette climbed highest in the box, but he couldn't direct his header goalwards. In the 24th minute, the woodwork again came to the aid of the Lyon 'keeper. This time it was his crossbar to the rescue as it repelled Gashi's header from a corner.

Two minutes later, Lopes got his toes onto a cross, but he couldn't control the shot. Another Grasshoppers corner brought more danger to the OL goal as another header sailed over. In the 36th minute, another combination down the right saw Grenier cross for the head of Lacazette only for Bürki to make the save. The intensity dropped out of the game after the blistering opening, but you could still cut the tension with a knife. From 32 metres out, Grenier's free-kick took a slight touch off the wall and went within a whisker of catching out the Swiss side's 'keeper. Another free-kick two minutes later saw Bürki stretched to push it clear. It was scoreless at half time. Les Lyonnais had struggled in the opening half an hour before slowly taking control of proceedings.

Lyon showed more desire after the interval, but the side was still committing too many technical errors to really dominate. Lacazette saw his effort in the 52nd minute deflected behind for a corner. Gashi couldn't hit the target from the edge of the area. In the 64th minute, another Grenier free-kick from wide on the right picked out the head of Bisevac who gave the visiting 'keeper no chance. The crowd rose as one. 1-0 for Lyon. OL looked a different side in the second half. But in the 72nd minute, the Swiss side won back possession in midfield and Salatic produced an instantaneous chip that flew inches over the crossbar. After an excellent first half, Grasshoppers struggled to carve out any other real chances. Toko burst into the Lyon area and cut the ball back for Gashi, but he couldn't hit the target. OL seemed content to control the final minutes, but the crowd pushed them forward in search of another goal. Lisandro was working hard to prevent the Swiss from playing out from the back.

After a difficult opening 45 minutes, Les Gones were a vastly improved outfit in the second half and made the breakthrough with a set piece. The final whistle confirmed OL's slender win and their slight advantage to take into the second leg. But there is still everything to play for in Zurich where the home side will have nothing to lose.