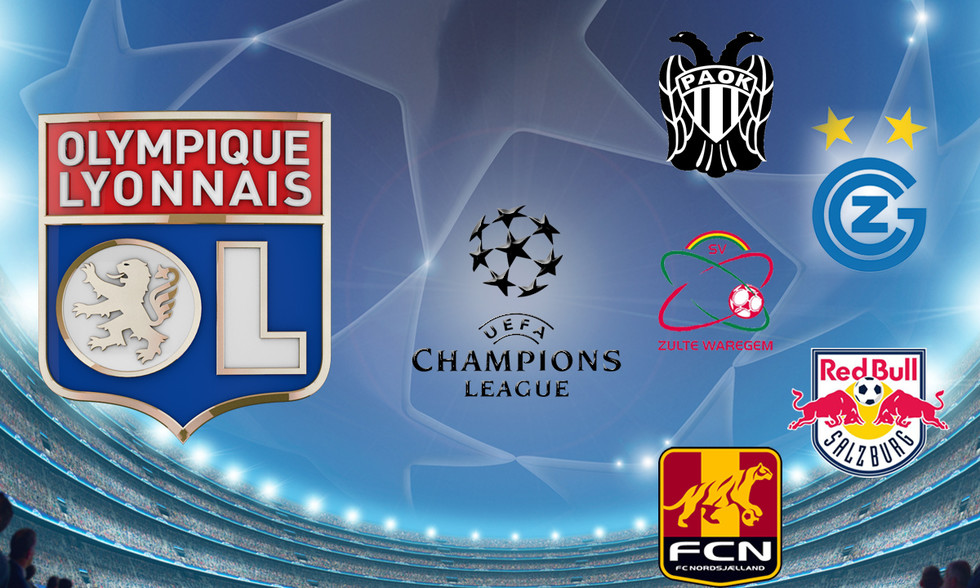 Olympique Lyonnais will discover its opponent for the Champions League third preliminary round at the draw on Friday. Red Bull Salzburg, Nordsjaelland, Grasshopper Zurich, Zulte Waregem and Bursaspor are the five potential adversaries…

Hailing from Wals-Siezenheim in the Austrian region of Salzburg, Red Bull was founded in 2005 after taking over Austria Salzburg. The club has won four Austrian championships, in 2007, 2009, 2010 and 2012, and one Cup in 2012. Since their creation, Salzburg has played in Europe but is yet to reach the group stages of the Champions League. By finishing second last year, Red Bull have another chance to make it this term.

Reyna Serna, the young Peruvian, and Hungarian goalkeeper Peter Gulacsi joined the side during the mercato. Only Dutchman Mendes da Silva has left the club.

FC Nordsjaelland was founded in 2003 when two clubs merged. Thanks to their first league title in 2012, the club qualified for the first time for the group stage of the Champions League. In a group featuring Juventus, Chelsea and Shaktar Donetsk the Danes suffered five defeats and earned just one draw against their Italian opposition. Second to Copenhagen last year, Nordsjaelland will be looking to return to the group stage.

Andreas Laudrup has returned from loan while Ivorian defender Jores Okore has left during the current mercato.

With 27 Swiss league titles, Grasshopper Zurich is Switzerland's most successful club. Their last title dates back to 2003. They have also won 19 Swiss Cups. The club from the Swiss capital have taken  part in 13 Champions League campaigns, the last time being in 2003. By finishing second last year, Zurich have the chance to return to Europe's premier club competition.

While Coulibaly, Zuber and João Paiva have all left the club, only the striker Johan Vonlanthen has signed.

Zulte Waregem is a Belgian club founded in 1935, and is based in the city of Waregem. Their only silverware is the 2006 Belgian Cup. Second in the Belgian championship last season, Zulte Waregem have qualified for the preliminary round of the Champions League for the first time in the club's history. Their only previous European experience was in the 2006-07 campaign when they were eliminated from the last 16 of the UEFA Cup by English side Newcastle.

The club has had a busy mercato to date. Frenchman Duplus and Belgians Verboom and Godeau have joined the Waregem outfit. Thorgan Hazard has been loaned for another season from Chelsea. Delaplace, Van Der Haegen, Christiaens and Ronsse have all quit the club.

The club from Bursa, founded in 1963, won the Turkish Cup in 1986. In 2010, they were crowned champions of Turkey for the first time, becoming just the second non-Istanbul club, after Trabzonspor, to win the country's top prize. That triumph saw them compete in the Champions League the following season. With five defeats in a group including Manchester United, Rangers and Valencia, Bursaspor were eliminated. In the last two seasons the club has been eliminated in the play-offs for the Europa League. Last season, the club finished fourth in the Süper Lig, which secured a place in the third preliminary round of the Champions League.

Bursaspor have bolstered their defence over the summer by signing three former Ligue 1 players, Sébastien Frey, Taye Taiwo and Renato Civelli. Midfielders Yasin Pehlivan and Şamil Cınaz have also signed on. Maurice Edu and Scott Carson have headed to England while Odabaşı has left the club.