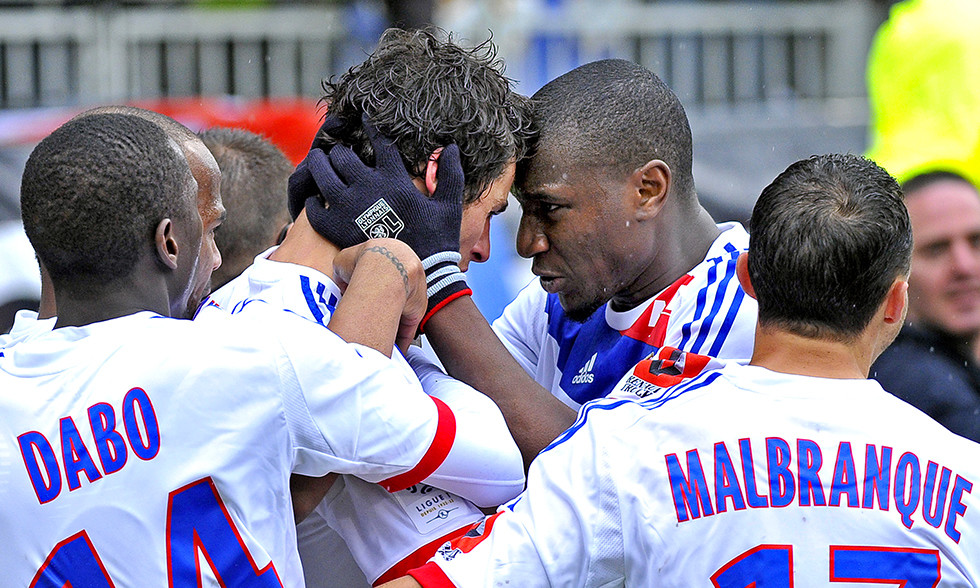 Lyon were held to a 1-1 draw by derby rivals Saint-Etienne in what was a classic 'match of two halves'. The result means OL lose ground on Marseille in the race for second place, but do conserve their place in the top three... Saint-Etienne remain fourth...

14:00... kick off of the 106th derby against Saint-Etienne and passions were running high. A lot had been said and written about this unusual time for such a big match. First there was the historical significance of these two old foes. But this was also a match near the top of the table, between third and fourth with a place in the next season's Champions League on the line. If Les Stéphanois managed to claim the victory and the three points, they would leapfrog Lyon into third. Looking at it another way, if Lyon got the win, it would be a massive step towards securing a top three finish, especially after Lille's draw on Friday, while also keeping the pressure on Marseille. Finally, there was the chance to equal the record of six consecutive derby victories. Lyon coach Rémi Garde decided to stick with the same team (4-1-4-1) that that won away to Montpellier, with the exception of goalkeeper Vercoutre, missing with a knee injury. Lopes replaced him for his first appearance in Ligue 1. For Les Verts, captain Perrin was injured during the warm-up and replaced by Sall.

The stadium was packed to and the atmosphere electric as Aubameyang created the first opportunity, but Lopes made the save. The tackles were flying in in the early stages but neither side could claim control of the match. In the 27th minute, a Grenier cross was met by the head of Lisandro and Ruffier produced a decisive save. From a Mollo corner, Zouma met it at the front post to beat Lopes: 1-0 for Saint-Etienne in the 29th minute. The match was then interrupted for a couple of moments for a few incidents in the stands, and when play continued the tension was palpable.

Lisandro then had a great chance, but his shot was off target. Then Briand, unmarked eight yards out completely mishit his volley. It was a great chance for OL to equalise and it went begging. With a lightning counterattack in the 46th minute, Aubameyang found himself through one-on-one with Lopes but he failed to capitalise and with the final kick of the first half, but his effort from the edge of the area failed to draw the two sides level.

Les Lyonnais, despite the lion's share of possession were too many errors with their final ball in the opening 45 minutes and ASSE were solid at the back and led thanks to one of their few chances in front of goal. Lyon needed to provide more in the final third if they wanted to get anything from this game and deny Saint-Etienne third place on the ladder.

OL started the half as they ended the first, with all the ball, but unable to breakdown Les Verts' defence. A 50th minute counterattack saw Aubameyang miss another chance to extend the visitors' lead, one-on-one with Lopes. Then Gourcuff equalised! In the 54th minute and at the end of a nice team move, Gourcuff fired left footed from inside the box and the ball, deflected off Zouma, beat Ruffier. OL looked a different side, quicker, more dangerous going forward. Hamouma went close to giving Les Verts the lead back, but Lopes produced a miracle save. The match opened up and could have gone either way. With 15 minutes to go, Lopes produced another great save. Les Stéphanois suddenly looked to be struggling physically. The chance was there for Lyon. The tension raised another level... But Lyon just couldn't find that precious second goal. From a Clerc cross, Aubameyang glanced his header across the face of goal and from the final Lyon corner, Ruffier denied Koné's header.

In a tense and intense derby, Les Lyonnais were a lot more dangerous in the second half than in the first and managed to equalise, but just lacked that little bit extra to claim all three points. Les Stéphanois were always a threat on the counterattack and carved out a number of chances for their striker Aubameyang who lacked his usual cutting edge in front of goal. So this 106th derby match ended all squad with status quo in the standings...