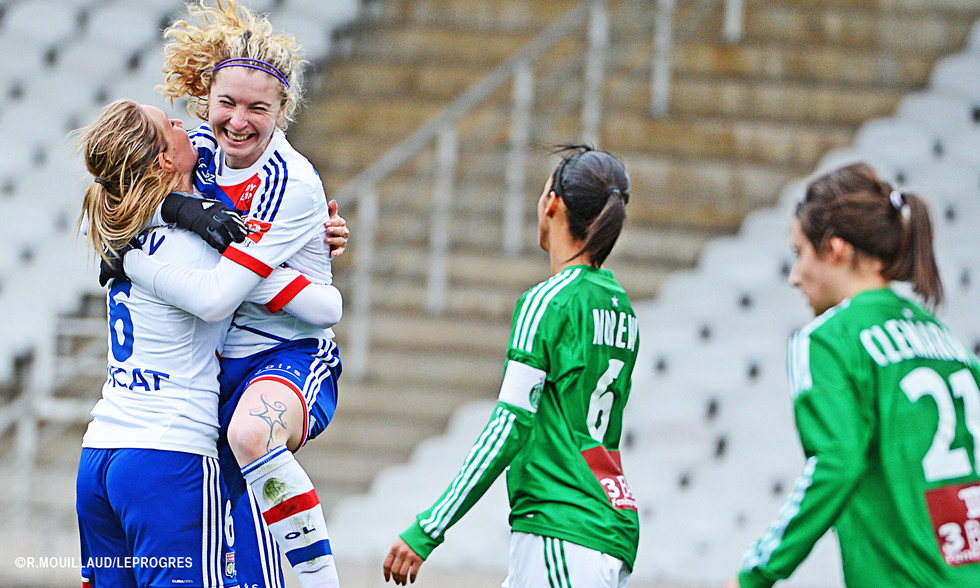 The OL Women prepared for their Champions League quarter-final against Malmö in the best possible way, with a 5-0 derby win over Saint-Etienne.

It was time for the derby - the women's editiion - on Sunday, a match that marked the return of emblematic OL captain Sonia Bompastor. Coach of the French Women's team Bruni Bini was in the stands along with jean-Michel Aulas. Patrice Lair had decided to rotate his squad three days ahead of the visit of Malmö, resting Elodie Thomis and Corine Franco and leaving Lotta Schelin on the bench. Japanese recruit Ohno made her first league start.

As was expected, OL monopolised the ball at the beginning of the match. Amel Majri was very lively and carved out a chance in the 15th minute from a long Laura Georges pass. Her left-footed shot flew wide. Saint-Etienne were solid defensively in the early stages, leaving little space for the OL forwards. In the 25th minute, Ohno tried her luck from 25 metres out, but to no avail. Straight afterwards, however, the Japanese attacker was on the spot to latch onto a poorly cleared cross, but saw her volley blocked. Eugénie Le Sommer had a gilt-edged chance when she ran clean through to face Méline Gérard one-on-one, but the Saint-Etienne 'keeper pulled out a decisive save to keep her team in the match (31'). OL were struggling with their finishing. Tonazzi seemed to have done the hard work with a sublime fisrt touch from an Ohno pass, but didn't get enough onto the shot to trouble Geerard.Two minutes later, in the 43rd minute, Sonia Bompastor sent in a delightful cross only for Camille Abily's header to miss the target.

The referee blew for half-time with the scoresl ocked at 0-0. OL still waiting to find the solution to break down their derby rivals. Saint-Etienne were very rigorous and positionally sound in defence.

Right from the start of the second half, however, OL had a huge chance when Amandine Henry rose highest to nod a header goalwards, but Gérard was once again up to the task with a spectacular save. FInally, Saint-Etienne cracked - after another corner from Bompastor. Abily nodded down for Tonazzi, who left Geerard no chance with her 50th-minute strike. Ten minutes later, as Lyon continued to rain attacks down on the visitors' goal, the referee blew the whistle for a handball in the area. Henry stepped up and fired true from the spot to craqck the game further open with OL's 100th goal in just 17 matches this season. Camille Abily made it 3-0 in the 66th minute, tackling Louisa Necib's downward header int othe goal for her 18th of the season after Wendie Renard had sent in the cross. Saint-Etienne were struggling to even get the ball in to OL's half.

OL had definitively taken the upper hand over Saint-Etienne, but the match's masterpiece came from one player - Louisa Necib - who hammered a magnificent shot into Gérard's left-hand side netting from 20 metres out (76'). In the minute that followed, Saint-Etienne came within a whisker of pulling one back from a corner, but Bouhaddi pulled out a finger-tip save to clear her lines and maintain the clean sheet. The attacking festival was then rounded out when Le Sommer broke down the right and sent in a cross-cum-shot that Ludivine Coulomb deflected into her own goal.

OL made the differene in the second half faced with a courageous Saint-Etienne side who nonetheless lacked the attacking verve to hope for a better result. OL remain in top spot in the league after their 17th win from 17 matches this season.