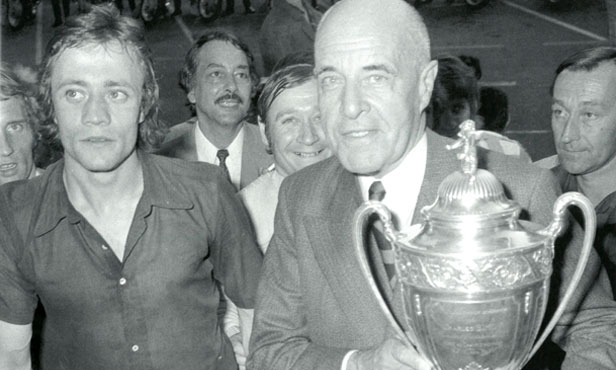 Lubjomir Mihajlovic joined from Partizan Belgrade. The experienced defender who played in the 1966 European Cup final would quickly become an integral part of the Lyon backline...

[IMG29984#L]Lubjomir Mihajlovic joined from Partizan Belgrade. The experienced defender who played in the 1966 European Cup final would quickly become an integral part of the Lyon backline.

OL would once again shine in the Coupe de France (French Cup), qualifying for the quarter-finals at the expense of Saint-Etienne after overturning a 0-2 scoreline from the first leg, 3-0 (hat-trick from Di Nallo). Lyon would go all the way to the final only to lose 1-0 to Rennes thanks to a Guy André penalty, the ex-Lyon player that had joined Rennes six months earlier.

The youth team, led by Lacombe, got its revenge by winning the Gambardella Cup.

[IMG29985#R]He scored 19 goals this season. OL was not involved in European cup competition, and almost no cup competition at all after being eliminated from the Coupe de France in the Rd-of-64 by second division outfit Brest.

But time had started to work its magic and the mix of experienced players (the Yugoslavs Mihajlovic and Trivic), the club stalwarts (Di Nallo and Chauveau) and the new blood (Lacombe and Domenech) started to throw up some impressive combinations. OL became more consistent in the league thanks to a more rigorous defence, without sacrificing its attacking qualities. The club directors put everything on the table to keep the group together, including four of the side’s best players who were all coming out of contract: Chauveau, Baeza, Mihajlovic et Di Nallo.

The latter stayed faithful to his club, despite the solicitations of Saint-Etienne, Strasbourg, Paris-SG., Monaco and Metz who dreamed of reuniting the Di Nallo-Combin partnership.

However, in the Coupe de France, it was another victorious year with a number of spectacular results. Indeed, OL qualified for the final by beating both OM and Avignon by the same scoreline home and away (0-1 and 4-1). Lyon defeated Nantes in the final 2-1 thanks to a handled goal from Lacombe and a Trivic penalty. Amongst others, two events stood out this season:
- Serge Chiesa refused to go on the training camp to Saint-Malo and was suspended for two matches.
- The players across the league decided to go on strike on December 1. On that day only two games were played by France’s professionals (Rennes-Nice and Nantes-Nîmes).

In European competition OL may have been eliminated in the second round, but there was no shame in going down to one of the big guns, PAOK Salonika. In the league Lyon achieved its highest ever finish since the club was founded, third, and suffered just one home defeat – to Monaco – all season.

In the Coupe de France, the club was eliminated in the quarter-finals on penalties at the hands of Sochaux. This tremendous season was capped off with qualification for the following season’s UEFA Cup, which replaced the Coupe des Villes de Foires.

OL parted company with two of their core players, Daniel Ravier and Jean Baeza, without signing replacements. The technical directors decided to go for continuity and give the club’s youngsters a chance. It would prove a good move as Lyon finished third for the second successive season.

In the UEFA Cup, however, Lyon would not enjoy the same success. Tough ties were the order of the day and Lyon were ousted by the redoubtable Mönchengladbach, who would go on to win the competition. This season would also see the departure of Di Nallo, the Little Prince of Gerland, after ten seasons with OL.

In the league, despite an excellent start, OL would fight against relegation for much of the season.

In the UEFA Cup, OL was again out of luck, getting drawn against another giant of the time, FC Bruges – a future finalist. The first leg ended 4-3 to Lyon at the Stade Gerland before a 3-0 return leg saw the Belgian side through. Halfway through the season Aimé Mignot made way for Aimé Jacquet, who, after playing for OL, would end his Lyon career as coach from 1976 until 1980.

It was, therefore, with Jacquet that Lyon disputed its sixth Coupe de France final against Marseile. OL played well, but unfortunately Chiesa and Lacombe didn’t enjoy the best of nights and OM scored twice. The Cup headed south to Marseille.

Lyon finished the season in sixth place which would deprive the club of qualification for the UEFA Cup, despite sitting second at the halfway mark, just one point from top spot.

OL’s chaotic end to the season meant there would be no European football at the Gerland the following year.

The run in the Coupe de France was halted with a bitter loss in the round-of-64.

This season also marked the end of the Rochet era, the most prolific in the club’s history in terms of silverware: 2 Coupe de France titles, but also five European campaigns in 12 years.

[IMG29920#R]Robert Michaux remplaced President Rochet, who would be seen, with hindsight, to have let the club’s finances go to ruin.

When the league resumed, the huge financial black hole was discovered that forced the club to sell Raymond Domenech. On a sporting level the season was more or less a catastrophe with a elimination from the Coupe de France in the round-of-64, but more alarmingly, OL only avoided relegation thanks to a superior goal-difference.

[IMG29988#L]In June 1978, after Domenech, it was Lacombe’s turn to join Saint-Etienne to appease the club accountants. In sporting terms, despite Lacombe’s departure, OL finished an honourable seventh in the league, although failed to shine in the Coupe de France.

However, OL were not out of the woods yet…

The team avoided direct relegation thanks to a priceless 1-0 win – penalty to Olio – over Marseille at the Stade Gerland at the end of the season. Olympique Lyonnais was, however, forced to into a play-off for their first division survival against Avignon.

Aimé Jacquet, who had already announced his intention to quit OL, maintained the club’s top-flight status. Thanks to his professionalism, and that of his players, OL prevailed amongst the elite, thanks notably to a 6-0 thrashing of Avignon in the first leg.

In the same year OL was crowned champions of France in the juniors, with a certain Laurent Fournier in the heart of the team – we’ll hear more of him later…