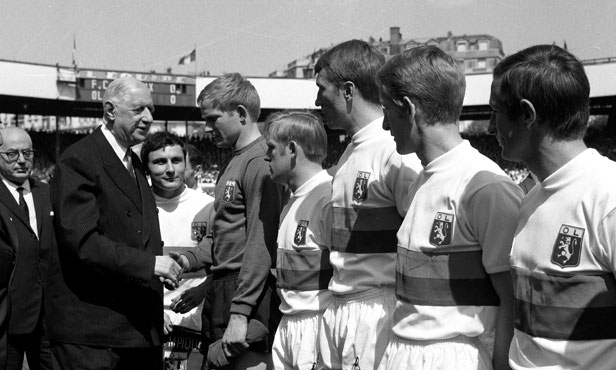 On August 21, 1960, coach Gaby Robert decided to take a gamble on an unknown youngster for the opening game of the season: Fleury Di Nallo – who would play seven games that season – and an attack composed of Daniel Roubaud, Nestor Combin and a certain Angel Rambert (who would...

[IMG29980#L]On August 21, 1960, coach Gaby Robert decided to take a gamble on an unknown youngster for the opening game of the season: Fleury Di Nallo – who would play seven games that season – and an attack composed of Daniel Roubaud, Nestor Combin and a certain Angel Rambert (who would also make a name for himself at the Gerland). OL was changing and Polak and Hatchi joined the club from Sedan.

Lyon established the foundations of a formidable Cup team, capable of achieving great things with players such as Mignot, Le Borgne and Djorkaeff all maturing.

Di Nallo, just like Combin and Rambert, confirmed his status as a great-player. If the season was in some ways disappointing, the future of the club seemed bright. The new coach would be replaced at the end of the season by Lucien Jasseron.

The German Linder and the Luxembourgian Nuremberg were the two main additions to the squad.

When Lucien Jasseron was coach of Le Havre he pulled off quite a coup when he won the Coupe de France with a second division side. A brilliant tactician, Jasseron’s first move was to bar the opposition route to Lyon’s goal and Marcel Aubour established himself as the first-choice ‘keeper. His arrival coincided with Olympique Lyonnais’ finest hours.

OL achieved its highest ever first divsion finish after leading at the halfway point. But Jasseron’s tactical brains, coupled with his players quality catapulted OL into its first ever final of the Coupe de France.

Unfortunately the team lost 2-0 in the second match against Monaco.

The season ended, with the promise of next season’s Cup Winners Cup, with Monaco’s two goals.

[IMG29981#R]Due to financial difficulties, Lyon didn’t sign any new players. But at the start of October, the arrival of the former Monaco player Taberner, sent OL on the way to one of its best ever campaigns.

Hungry for more success after the preceding season’s Coupe de France run, the Lyon players would win it this year: OL’s first trophy.

OL would also do brilliantly in the Cup Winners Cup, making the semi-finals after eliminating Odense, Olympiakos and Hamburg.

But the team would lose the replay against Sporting Lisbon, 1-0.

The directors of Italian side Juventus had been tracking Nestor ‘Lightning’ Combin who had been irresistible since the 1963-64 season.

With OL he played 43 official matches and scored 41 goals. Nestor would play with the France Under-21 side, the France senior team and finally with the France Military side, with whom he would be crowned world champion. Little surprise then that Juve was following his progress and would end up by buying him…

And it was the whole team that suffered from his absence. The club still performed honourably in the league and was even leading after eight rounds. But it was unable to reproduce its incredible exploits in the Coupe de France, or the Cup Winners Cup.

The season ended with the departure of the club’s second president Ferdinand Maillet, succeeded by President Rochet.

Coach Jasseron’s record remains largely positive and he will always be the first Lyon coach to win the Coupe de France.

The team had been gripped by doubt and an lack of efficiency in front of goal since the departure of Combin. It showed as the team was eliminated early on in the Coupe de France and only narrowly avoided relegation.

A transition season for OL after registering the departures of Jasseron, Djorkaeff, Aubour, Bruey, Traba, Margottin and… Aimé Mignot, who took over as director of the club’s amateurs.

The league may have been chaotic but the Coupe de France once again allowed the club from the ‘capital of the Gauls’ to shine. On May 21 at the Parc des Princes, after the playing of the 50th anniversary of the Coupe de France, the President of the Republic, General De Gaulle handed the precious trophy to Fleury Di Nallo, captain at just 23 years of age.

The team made a heroic return to Lyon where 100,000 well-wishes lined the streets.

[IMG29982#L]This season offered little in terms of the league or the cup with elimination by amateur team, Quevilly. However, it was another great year for the Cup Winners Cup where OL qualified for the quarter-finals after defeating Tottenham Hotspurs, thanks largely to the heroics of Yves Chauveau between the posts. Unfortunately, in the quarters, OL was reacquainted with an old foe: Hamburg, although this time they would only lose 2-0 after a replay.

The former captain of the 1964 Cup Winners Cup semi-final side played more than 400 matches in an OL shirt.

This season would not live long in the memory despite taking part in the Fairs Cup, where the club went out at the Round-of-32. There was to be no heroics in the league, or in the Coupe de France, despite the stand-out André Guy. With 25 goals he finished the season as the league’s top scorer and he had to do it almost alone after Di Nallo broke his left leg in the fourth match of the season.

[IMG29983#R]To mark his return to action after 11 months out of the game, Fleury Di Nallo scored two of the four goals against Bastia.

Also of note was the arrival of two young players, Chiesa and Lacombe, who would contribute largely to Lyon’s future successes. Lacombe was a member of this season’s Gambardella Cup side which lost the final against Saint-Etienne. He made his professional debut on December 7, 1969, against Red Star and scored the first of many, many goals.