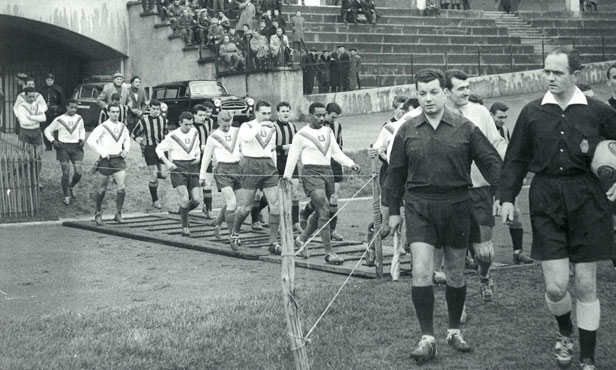 The President Grosvelin charged former LOU coach Oscar Heisserer with recruiting players with the aim of earning promotion to the first division in that very same year. On August 26 1950 OL played its first official football match and defeated C.A. Paris 3-0 in front of 3,000 spectators... Later the ambitious goal was achieved: OL were crowned second division champions in 1951. The final win of the season, 3-2 against Monaco, was played in front of 5,000 spectators.

This solid defender would go on to become one of France’s best players in years to come. But despite his talent, things quickly turned sour for OL. Faced with the inexperience of his squad, the coach Heisserer pulled on the boots at the ripe old age of 38. Yet at the end of it all, OL couldn’t avoid relegation back to the second division.

This first taste of D1 left its mark, as much on a financial as sporting level. Ten players left the club, replaced by a mere three: Schultz, Duval and Christiansen. While the youngsters Bonvin and Lerond developed quickly and Schultz started to find the back of the opposition net, OL built for the future. But the club had to wait a little longer before returning to the top-flight.

Several experienced players were brought in to earn promotion, including Hjarlmarsson and Jensen. It was a tough season, punctuated by the serious injuries to Genet and Sarrin, but OL prevailed and finished top of their group ahead of Troyes. OL were second division champions for the second time in four years.

The second season in D1 would be more successful than the first. It would also mark the beginning of a long stay amongst France’s elite (25 years). Despite a change in coach midway through the season, OL registered some impressive results, thanks notably to the experienced new players such as the Swiss international Fatton, but also Farmanian, Mouynet, Kermali, Cossou and Dalla Cieca all of whom helped develop the emerging young talents of Le Borgne, Gardon, Djorkaeff and Sabathier.
At the end of the season, OL finished a respectable 12th in the league, whilst also making the semi-finals of the Coupe de France (French Cup).

OL would finish in the top half of the table despite an average league season, but would shine, above all, in the Coupe de France. Having eliminated D’elle, Red Star and Brest, Lyon knocked out the redoubtable Aiglons Niçois after extra-time in the quarter-finals. Only a penalty appeal which fell on deaf ears saw OL bow out in the semi-finals against Sedan (1-0).

A 12th place in the league and a Round-of-16 elimination at the hands of Nice in the Coupe de France summed up the season, where only the arrival of “Loula” Cossou for 7m francs – OL’s top scorer on several occasions – would leave a mark on the history of the club.

OL lost Ernie Schultz, who had scored some 92 goals in Lyon’s colours, but saw the arrival of Le Borgne. Finally, two Lyon players, André Lerond and Robert Mouynet, were selected in France’s 22-man squad for the World Cup in Sweden, where they would finish third. OL finished eighth in the league and were again knocked out of the Coupe de France in the Round-of-16 by Reims, 2-0.

Once again, the league held little more than moderate success for OL, who finished in mid-table. However, the club wrote another page into its burgeoning history book by eliminating the mighty Reims of Fontaine, Enverne and Vincent in the Round-of-16... only to be themselves eliminated at the very next hurdle by the Stade Rennais after twice leading.
Finally, OL also took part in its first ever European competition: The Fairs Cup. The experience was a harsh one, knocked out by Inter Milan after a 7-0 trouncing in the away leg. The return match was far more even: 1-1 at the Stade Gerland.

The 1958-1959 season also marks the end of President Grosvelin’s reign. He made way for Frédéric Maillet who would remain at the head of the club from 1959 until 1965.

The club not only registered the departure of the President and the coach, but also four principal players: the international defenders Mouynet and Lerond, and the forwards Cossou and Constantino. Eugène Njo Léa and Jules Sbroglia are the two big signings next to whom would later be added the name of revelations Jean Djorkaeff and Nestor Combin who arrived from Argentina. This latter, unheard of player, who quit South America for Lyon almost by chance, would bring much joy to OL. But, all the same, the 1959 season marked the beginning of three difficult years for Olympique de Lyonnais.