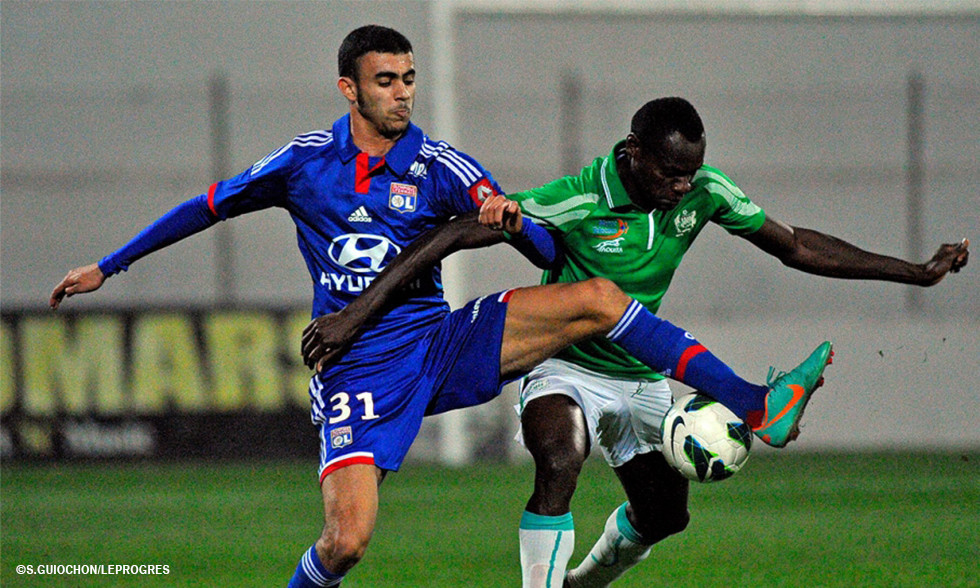 Independently of the absences of Gourcuff, Lacazette, Grenier, Briand (all recovering from injury), Lovren and Vercoutre (both other reasons), Rémi Garde opted to rotate his squad for this friendly match that OL used as an elevated training exercise. The stadium? An old-style 12,000 capacity ground with just one covered stand and the rest concrete terraces, surrounded by a sand track. The pitch was in good condition, illuminated by four wheezy floodlights. Nonetheless, the atmosphere was excellent with the local fans making a lot of noise under the direction of some dedicated chant leaders.

Were fireworks expected in this match? Not at first glance, for a range of reasons… but the booming of the PA system as the players took the ground, with flags waving in the ocean breeze, set the tone nicely. There were customary photos with Bernard Lacombe as OL's representative before the match started in physical fashion with Bisevac receiving an early yellow card (1'). The local supporters got straight into the spirit of things, loudly cheering flashes of individual brilliance, lauding the nutmeg and the dribble. The stadium transformed into an arena. OL looked to impose their game in the face of the opposition's fans and the fighting spirit of the green-shirted locals. On the counter, Benzia tried a lob that was easily dealt with by the home 'keeper (9'). Bastos fired straight at the goalie after a jinking run (15'). Lopes was practically unemployed as the hosts fired wide, shot weakly and lacked composure with the final ball.

Goals didn't seem to be on the menu for the evening, with Fofana failing to find the target with his effort (28'). Benzia latched onto a Ghezzal pass in the middle for the game's first clear-cut chance (37'), but his point-blank shot was stopped. Straight afterwards, a missile of a Moroccan free kick sent a pulse of electricity through the home fans. But it was 0-0 at half-time, and the announcement that the Moroccan coach had been fired drew a huge round of applause! Singer Cheb Bilal was also greatly appreciated by the crowd as he provided the half-time entertainment while the replacements warmed up.

Réveillère, Lisandro, Malbranque, Gomis, Dabo, Gonalons and B.Koné  all appeared for the second half. OL changed from a 4-3-3 to a 4-4-2 formation with Ferri and Monzon as wing-backs. Gomis got his first shot on target (48').

Time passed and numerous opposition substitutions broke up the game. The atmosphere dipped and the temperature dropped. OL looked to focus on their passing game and rediscover their touch, their tactics and their physical form rather than going all-out to win the match.

So things were headed for a goalless draw despite Gomis' best efforts, an entertaining but not spectacular match as OL had other priorities than winning. The Greens of El Jadida were content to have stymied their glamorous opponents while still managing to push forward and indulge their predilection for dribbling.

"It was a high-grade training session. The opposition upped the tempo. It was interesting. There was no winner, and that makes sense. There weren't a lot of chances. Concerning the formation and selection issues, I adapted to the elements I had at my disposal. Also, I didn't want any of my players to overdo it. The atmosphere? I thought it was great."

The result wasn't important. We were at work.

"It was a training match against a very motivated opponent. We stayed calm. We ran a lot; the result wasn't important. We worked hard and no-one got injured. The captain's armband? It felt great. But with or without it, I'm the same player. And anyway, we need 11 captains out on the field."

All the photos form the training camp, the interviews and training exercises of Rémi Garde's men can be found at midday each day on OL Info (12:30, again at 12:45) and each evening on OL System (from 19:00).

OLTV: follow your favourite club everywhere, all the time!