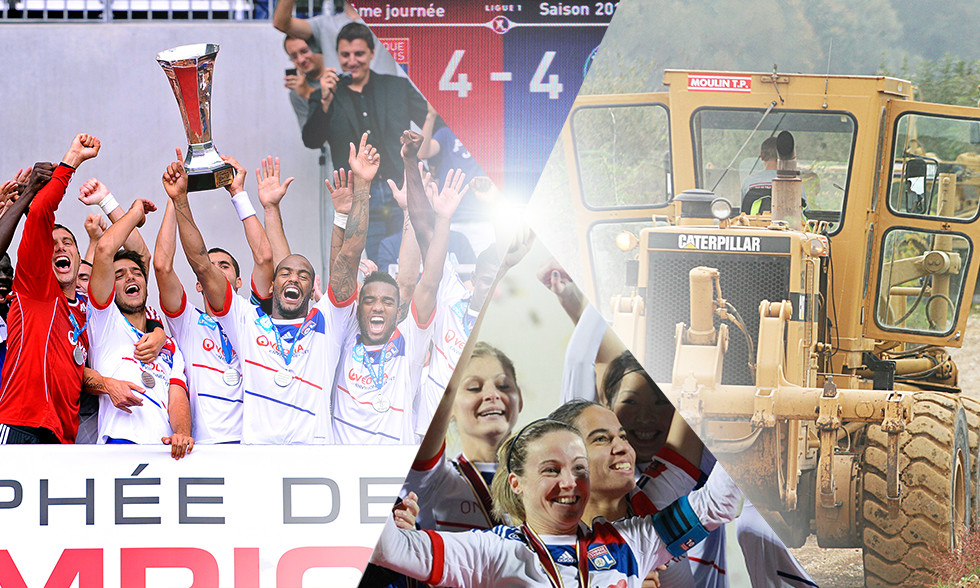 There were titles for both Patrice Lair's ladies and Rémi Garde's men... a return home... youngsters coming up through the ranks... lots of goals... and... the first stone laid for the new stadium...

Ity had been for too long between titles for OL... but the wait came to an end with a fifth Coupe de France crown. A goal from Lisandro... a decisive save from Lloris... physical, technnical and tactical domination as OL beat US Quevilly at the Stade de France, taking direct Europa League qualification into the bargain.

It was a special start to the season, with a trip to New York to face Montpellier in the Trophée des Champions. Despite falling behind twice, Gonalons and co. got back on level terms thanks to Gomis and Briand before winning out in a penalty shootout with Hugo Lloris' heroics clinching the victory. OL lifted the trophy for a seventh time... the first time since July 28, 2007, at the Stade Gerland, against Sochaux (2-1).

These ladies are amazing. The insatiable OL Women's team snaffled up every title on offer. The Coupe de France, the league title, the Champions League and finally the World Club Cup at the end of a tense final against the best opposition they had faced in recent seasons. Each time, they showed their tactical and technical qualities... and their stunning brand of team play, individual talent and the steely mental strength of true champions. They erased the word 'defeat' from their collective dictionary. Champions on the field and off; always ready to talk to the fans and sign autographs with a smile... and coach Patrice Lair extended his contract with OL, a sign of even greater things to come for both Lyon and France.

The first earth was moved for the construction of OL future stadium, the Grand Stade, which is scheduled for a grand opening at the beginning of season 2015-16. There was a long wait to get the green-light from the authorities... and now the wait to see the emergence of the first structures of the stadium that should see OL step into a new dimension.

At the beginning of the summer, he knocked timidly on the door of his former club... then in the space of a few weeks, he showed that his desire and his talent were intact despite a season out of the game. He wowed his teammates, his coaches and all observers. In December, the extension of his contract showed how indispensable he had become to the squad and the club. Steed leads by example, and is one of the many reasons to follow the new OL with interest.

OL turned increasingly towards its youth academy graduates in 2012. Rémi Garde has had no hesitation in putting his faith in his young guns: 11 of them have made their senior-team debut since the OL coach has held the reins. Umtiti, Benzia, Ferri, Lopes, Ghezzal… and all the others have made debuts in Ligue 1, the Europa League... and they have stepped up to the occasion, especially in the matches against Sparta Prague and Shmona. Proof and vindication that OL's youth system is of the highest order.

Bafétimbi Gomis chose Stade Vélodrome, on November 28, to score his first hat-trick in Ligue 1. He almost single-handedly sank Marseille in this postponed match, a match that OL dominated from beginning to end. It was a lesson in striking... and a lesson in team play that earned OL top spot on the table. Gomis, who also scored in the 104th derby with a thunderbolt from distance that blasted into the back of Ruffier's net (81'). A 1-0 win on March 17.

On August 18, the Brazilian had only been on the field for two minutes. A corner poorly cleard by Troyes was all the acrobatic left-footer needed - seconds later his spectacular overhead shot hit the back of the net. An all-time classic that handed the lead to Lisandro and co.

On February 25 at Gerland, PSG rescued a draw in injury time. It was a spectacular match between two sides who simply wouldn't give up. After going 1-0 down, OL took the upper hand, making 3-1 just a few minutes half-time. But Nene then pulled one back from the spot just after the break. OL added a fourthand thought they had sealed the deal only for PSG to get back to 4-3 before levelling matters through Hoarau's 94th-minute header. There was outrage in the OL ranks, but what a spectacular match! And let's not forget the semi-final of the Coupe de la Ligue in Lorient, when OL won through to the final in extra time (4-2) after having equalised in the 94th minute... nor the 3-1 win at the Prac des Princes to reach the semis of the Coupe de France.