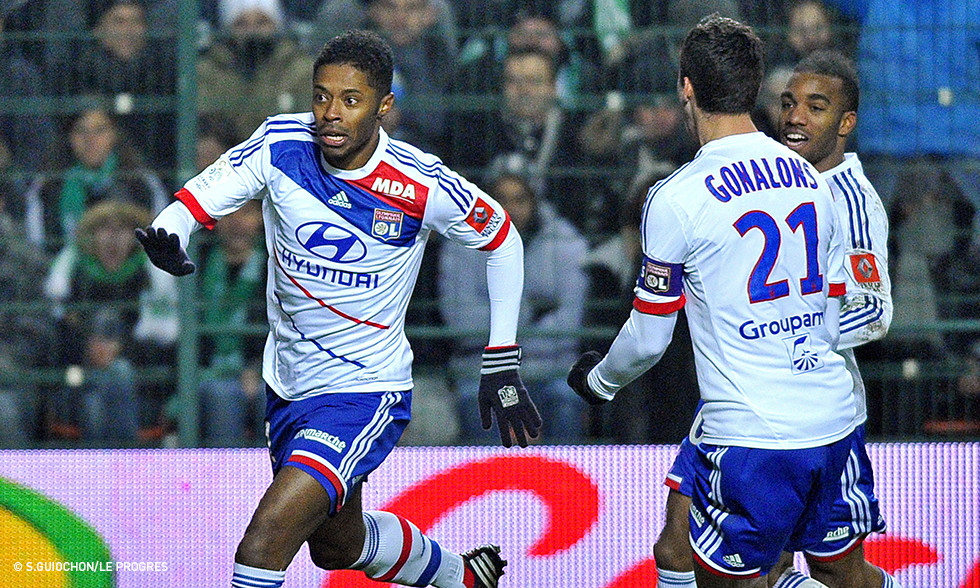 The Brazilian wizard's free kick handed OL - a man down for the last half-hour - a precious derby win over Saint-Etienne... OL now have a five-point lead over PSG... and remain unbeaten in Saint-Etienne since April 1994...

This derby was a highly anticipated affair, a top-of-the-table clash between the leader and third place. Les Verts were unbeaten in ten league outings (13 matches including the Coupe de la Ligue); OL were on top of the table following their win over OM and had just ended the group stage of their Europa League campaign in fine style with a team full of young talent. OL were also assured of remaining in top spot after OM had lost to Lorient earlier in the day.

Brandao and Mignot were absent from the Saint-Etienne ranks; Lemoine was preferred to Guilavogui. For OL Lovren, Briand and Lisandro were unavailable due to injury. Rémi Garde opted to hand a start to Yoann Gourcuff on the left flank in place of younster Ghezzal.

The Stade Geoffroy-Guichard was sold out despite the biting cold, and things soon hotted up on the pitch, with two fouls in the first 50 seconds. The slippery surface was tough to negotiate, but the start of the match was full of promise. Unfortunately Gernier was forced off in the 11th minute, replaced by Fofana. Malbranque shifted up a gear. Bisevac bungled shortly afterwards and left Vercoutre in danger, but the first clear-cut chance of the match fell to Malbranque in the 23rd minute...  Réveillère went within a whisker of opening the scoring following a superb team move involving Lacazette and Gomis (32'), his shot smashing into Ruffier's post! It was a tight match, with both sides pressing hard and defending aggressively while trying not to leave gaps at the back. Not necessarily the kind of attacking display that most would have hoped for in this glamour tie...

Would the match spring to life in the second half? Lacazette broke on the right and earned a corner, from which Gomis got his header on target. OL looked to be taking the upper hand until Dabo received his marching orders for a tackle on Gradel (55'). Gonalons dropped back into the centre of defence and Umtiti moved to left-back. Bastos came on for Gourcuff and OL played in two lines of four.

Bastos beat the Saint-Etienne wall with a free kick five minutes after coming on... Ruffier underestimated the Brazilian's effort and OL players were answered as the ball hit hte back of the net. Les Verts responded by redoubling their efforts and pushing from all directions. Clerc had a chance to equalise but skewed his point-blank volley. OL did better than just defending, with Fofana going close as the game finally delivered the attacking frenzy that all had been hoping for. Lyon held together magnificently to weather the storm of green-shirted attacks. Saint-Etienne also finished with ten men after Alonso saw red , and OL held out despite headers from Ghoulam and Aubameyang hitting the crossbar. OL is the outright leader, while ASSE fell to their first defeat in 13 competitive matches.