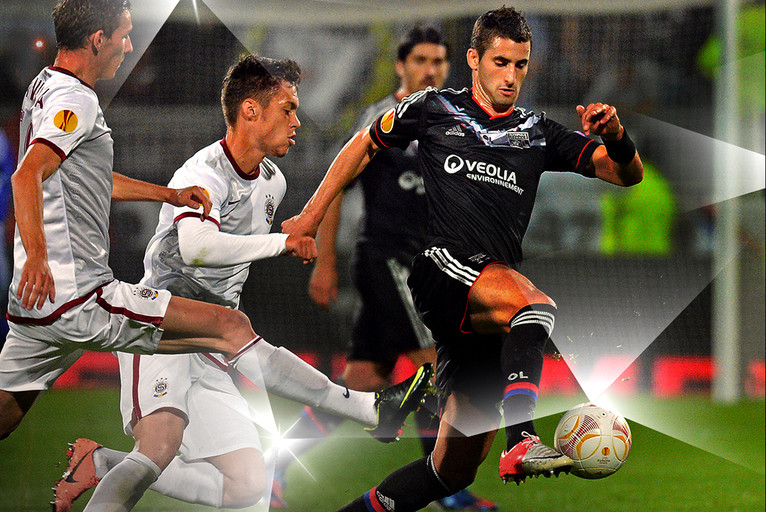 OL are in the box seat after two wins in as many matches... The Basque visitors have picked up just one point... Now it's up to OL to cement that first place in the group ahead of the return matches...

Lyon got back to winning ways at the weekend, which was not the case of Athletic Bilbao despite a good performance against Valencia. While OL's win put Lisandro and Co. into the top three, just a point behind OM and PSG. The loss means the Basque side are dangerously close to the relegation zone, two points clear of Deportivo La Coruna. OL are flying with maximum points in the Europa League while Athletic drew at home to Hapoel Shmona and lost 3-1 away to Sparta Prague.

The numbers are talking form and clearly the seven-times French champions have the upper hand in that department. But nothing has been decided in the Europa League group stage. There are still enough points on offer and two places up for grabs for the Rd-of-32 knock out phase. OL are on the right track with six points and host Hapoel Shmona on 6 December. Victory on Thursday will be a huge step towards qualifying and even in the box seat for finishing top of the group.

Athletic are already 5 points down on OL. It's a poor start, but they still have a chance… A good result at the Stade Gerland will put them right back in the mix, especially if it's a win. The Basques will have destiny back in their hands.

OL are 90 minutes away from making a huge step towards qualifying for the knock out stages in their 197th European match.

But no-one is about to rest on their laurels. Athletic Bilbao may not be an undisputed giant of the Spanish game, but they don't look the team they were last year. But they do boast a strong culture and identity and an excellent player in Aduriz who netted a brace against Valencia;  just like he did against OL in the pre-season friendly at the Stade des Alpes! Obviously there's also Llorente, but possibly out of form... On the bench, the Argentine technician Bielsa is known for getting his teams playing good football.

OL are back on the right track in the league thanks to their win over Brest last weekend. It wasn't all perfect, but it was enough for the three points. OL are well-placed just a pint behind PSG and OM. They can play with the pressure off in Europe ahead of Sunday's match against OM at the Stade Vélodrome. Gourcuff and Grenier are not fit enough yet for a place in the squad. The question is will Rémi Garde continue with his 4-4-2 or revert to a three-man midfield?  Will he rest certain players with an eye on the upcoming matches, starting with Marseille? Rémi confirmed that the most important match this week was the weekend's clash in the south of France…

OL is 90 minutes from taking a big step towards qualification for the Europa League round of 32 in what will be their 197th continental match. But OL have give everything to make it happen, and we know Rémy Vercoutre and Co. will give it their best shot...