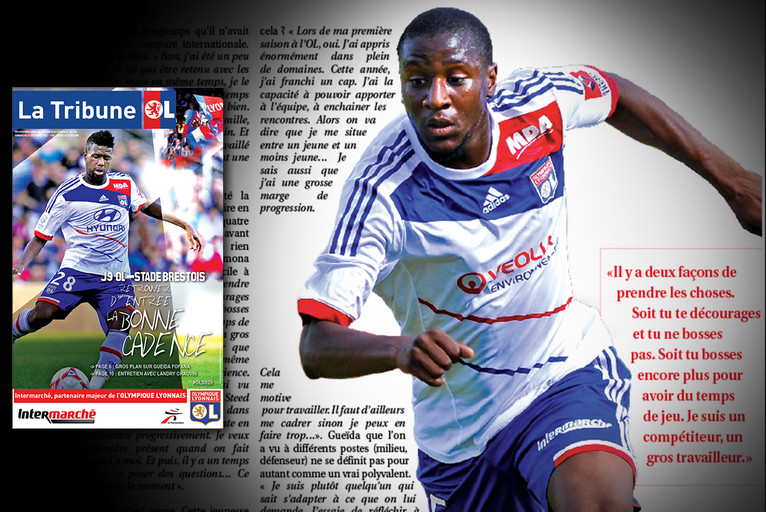 Gueïda Fofana isn't the type to let his head drop... And he doesn't mince his words... He shows it on the pitch each and every time he gets the call...

It's been a long time that he hasn't enjoyed an international break. He's making the most of it. "Well, I was a little disappointed to have missed out on the France U21 squad, but I understand given my lack of playing time... Perhaps there's a good side to it. It was a chance to enjoy some time with the family and my son who was born on 6 June. And we also worked hard on the physical with Robert Duverne."

The young dad began the season in the starting line-up. He played all of the opening four matches and then almost nothing until the Europa League match against Shmona in Haifa. That must have been tough to go through? "There are always two ways to look at things. Either you get discouraged and you stop working or you knuckle down and work even harder to get more playing time. I'm a competitor, a hard worker. I want to show that I can bring something to the squad, even if I don't have a whole lot of experience. Did he want to leave when he saw the signatures of Arnold Mvuemba and Steed Malbranque? No. I'm looking at it as a challenge. I'm getting stronger and stronger. I want to be ready whenever I get the call. At the end of the day, there's a time to ask yourself those questions, but now isn't that time."

There are always two ways to look at things. Either you get discouraged and you stop working or you knuckle down and work even harder to get more playing time. I'm a competitor, a hard worker.

21 years old is still young. But his young age doesn't prevent Gueïda from seeing things for what they are, having plenty of self confidence, desire and respect... The hard worker knows "it will pay off in the end." Before then, he looks back at his start to the season: "I think I madfe a good start, playing a lot of football. I had a good preseason. Then I didn't play much, but I kept working hard and got my reward against Shmona. I felt great and I scored two goals. Those goals were my first with OL and it's always nice when the goals are decisive. But for all that, I don't think that was my best game for Lyon. I would say the Ajaccio match last season and the Trophée des Champions this year were my best."

Does he agree with the observation that a number of the OL squad are still doing their apprenticeship at the top level? "In my first season with OL, yes. I learnt an awful lot in so many areas of the game. This year, I've stepped up in class. I have the ability to bring something to the team and play matches back to back. So I'd say I'm now somewhere between a youngster and a less young player... But I also know there's plenty of room for improvement. It's motivation to keep on working. I have to keep my head down and keep it in keep because sometimes I try and do too much..." Gueïda, who we've seen playing in midfield and defence, doesn't consider himself a utility player: "I'm more of a player that adapts to what is asked of him. I try and think about what I need to do... But first and foremost, I'm a midfielder."

It's hard to know if he'll play against Brest or Athletic Bilbao in the next week, but the mate of Grenier and Lacazette knows just what is at stake in these two games. "It's always difficult to play these games after an international break. We have to be careful to hit the ground running. We need the three points on Sunday and then defeat Athletic, because a win will almost mean we're into the next round..." Obviously, he admitted, like everyone, that PSG certainly has the biggest potential to win the league: "We have a good squad and everyone gets along well, we're young and dynamic. We take the games one at a time. We'll see... But one thing is for sure: We'll do our best."