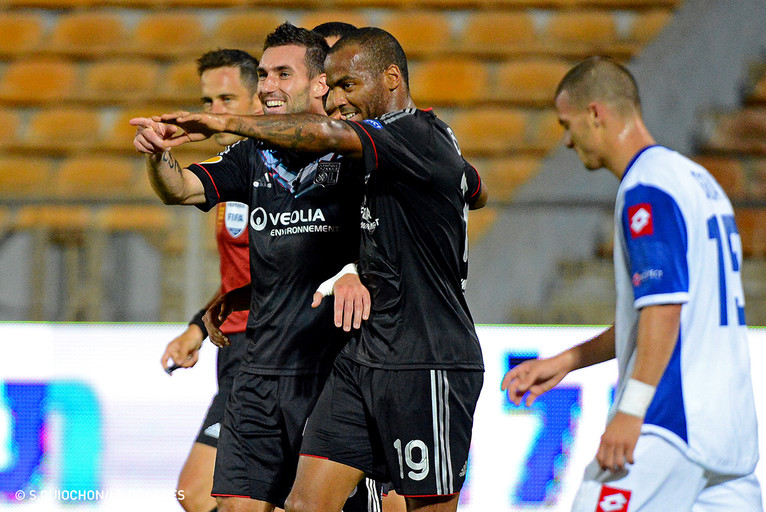 OL did the hard part when they were leading by two goals at half-time... before unbelievably allowing their opponents back into the game… Thankfully Fofana's header secured the points…

It was a bit of a trip into the unknown for Olympique Lyonnais, because of the opposition, the conditions and coming hot on the heels of last weekend's first defeat of the Ligue 1 season against Bordeaux. Rémi Garde went for change by naming Bakari Koné, Monzon (first start), Fofana… and Ghezzal, in his first ever appearance in the first team squad.

A tough start for OL on a very difficult pitch. Hapoël opened the scoring in the seventh minute. Was it reason for concern? Not really... In just a few minutes, Lisandro and Co. were quickly back on level terms. Fofana netted the equaliser with a long-range effort after a solo run, before Monzon fired OL in front with a free-kick. The goals coming in the space of five minutes.

On the half hour, a superb team move with Briand, Grenier and Lisandro set up Réveillère in a shooting position in the area and the France international made no mistake. In all three OL goals, the influence of Lisandro, with or without the ball, was crucial. The first half ended without further incident as OL, after an early scare, stylishly went about their work and held a commanding lead at the break.

Apparently, Les Olympiens don't like the starts! Lévi pounced on a loose pass in defence to blast home beyond Vercoutre (51'). Benzia replaced Grenier as Lisandro dropped back a notch. Ghezzal was forced off with an injured ankle on the hour mark, which saw Malbranque come on behind Benzia. And then Hapoël equalised from the penalty spot after a foul by Koné! An incredible scenario…

The hosts chose the direct route to upset the seven times French champions. It was a whole new ball game. OL had fialed to emerge for the second half. But they still carved out a massive double chance from a Malbranque corner. The Hapoël defenders twice cleared off the line (81') from Lovren and Koné. Lisandro then headed wide of Amos' goal. OL suddenly found their second wind in the closing minutes, but the reigning Israeli champions held on... until... Fofana's header from Malbranque's corner in stoppage time. Phew…