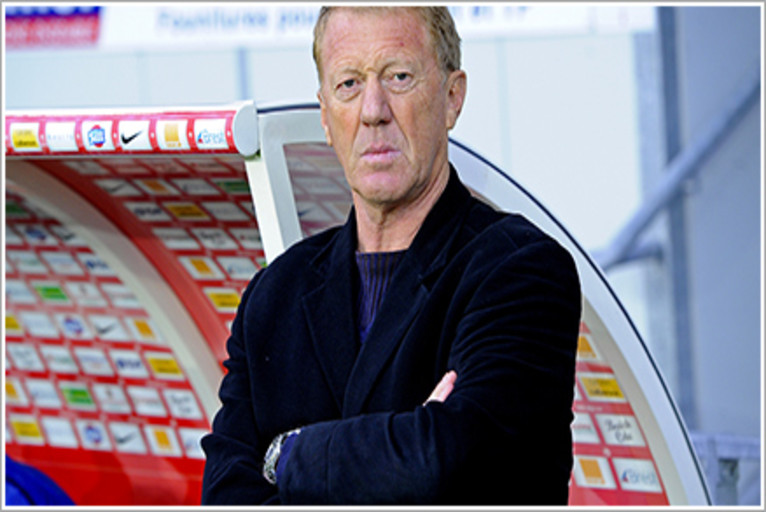 This summer, the former Brest coach Alex Dupont dropped his bags in Ajaccio with the aim of helping the Corsican side avoid the drop. It's a challenge that suits the old war horse who eyes are always fixed on the next challenge and who always boasts a positive attitude...

We left you at Brest last season and we find you at AC Ajaccio now. Is it a different type of coaching job between Brest and Ajaccio? No. There are actually a lot of similarities between the two clubs. I have left a region with a very strong sense of identity and I've arrived in another one! The same goes for their love of football. One was a very warm family club and Ajaccio is the same! A lot of my professional career has been spent at clubs where I've had to construct something, help a club grow and where winning games is always tough. Maybe these club's correspond to my character somehow, club's where you have to uncover new talent, help them progress, bring them through difficult times...

Have you brought the 'Losers Cup' with you (a Cup presented at training for the player with the worst record at shooting practice)?
Of course. And for the whole week the players have been taking breakfast together. For us, team spirit is essential. We need to think about the team every day, that's the key to our survival.

How has the start of the season been for Ajaccio?
In terms of the points, it's been good. We have taken seven points... well in fact... five points...* Two points less that is preventing us from being near the top of the table... two points is a lot when you see how tight things can be at the end of the season. But that's behind us now and we are just turned towards the future. The objective hasn't changed: avoid relegation, grow and improve. This season we've decided to take the gamble of playing attractive football. We saw against Valenciennes (3-0 loss), that when we don't play attacking football, even for just 20 minutes, we're taking a huge risk. I want the team to attack, to let itself go. I want to play the same home and away.

What does you team need to improve?
When you're a coach, you are always looking for perfection, even if you will never reach it. We need to stay very disciplined. If we start to play for ourselves and not for the team, we will struggle. I want the team to attack. At the very top level, you need talent, quality, but also attitude.

People must have speaking to you a lot about Adrian Mutu recently…
His signing for the club had a huge media impact that we're not used to here. For the old saying, 'Live happy, live hidden' doesn't really apply here anymore. HIs arrival turned the limelight on the club, but that's not the ultimate aim of bringing him to the club. Adrian, is above all, an incredible attacking and skilful recruit. Ajaccio will be a stronger team with him on the field, for sure. He should be in the squad for the trip to Lyon. Perhaps even in the starting line-up, depending on how he is going, physically, which is where he needs to improve at the moment.

What do you think of OL?
Only good things. Between the team that ended last season and the team that will be taking us on this weekend, with the exception of the departure of Hugo Lloris which is a blow, even if I'm sure Rémy Vercoutre will do what he has to do, OL is the best team in the competition behind PSG. It's already very impressive at the back: Réveillère, Monzon, Lovren, Bisevac, with Gonalons and Mvemba ahead of them, oh là là! You then add the attacking options, the talented young players, the quality on the bench... I say it again, think OL are second-favourites for the Ligue 1 title just behind PSG.

*AC Ajaccio were handed a two-point penalty at the start of the season after incidents that followed their 1-1 home draw with OL last 13 May 2012.