He was the 'Policeman' 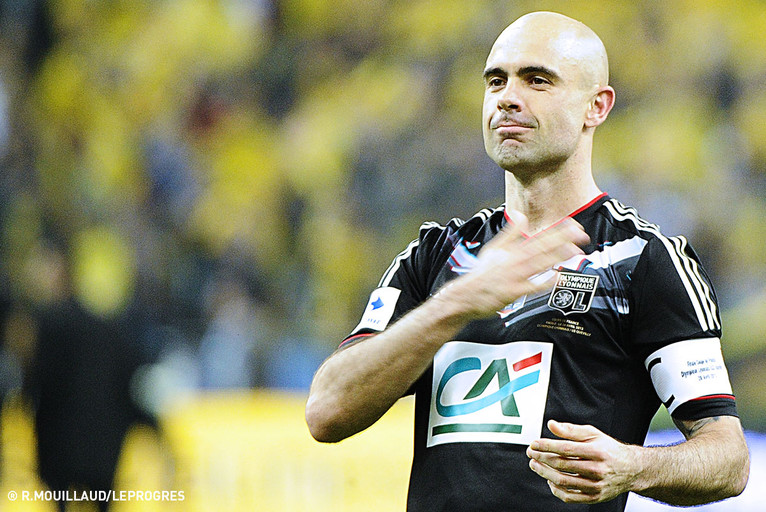 In eight seasons, Brazilian defender Cris made a permanent place for himself in Olympique Lyonnais history, thanks to his performances, his qualities, the trophies he won and the way he carried himself on and off the pitch...

With a wave of the magic wand, travel back in time to 28 August 2004. Alongside Captain Claudio, a new bald head is making his debut in the centre of defence. In just a few short minutes, the supporters already know it's 'a very astute signing'. With the first two or three tackles he imposes his physical style, his aggressiveness, his defensive science and his overriding desire to succeed. Cris has just arrived at Lyon to replace Edmilson.  Shortly afterwards, Essien nicknames him 'The Policeman' a reference to law he enforces on the pitch.

He was immediately adopted by the fans. Shortly after he scored his first goal against Manchester United in the Champions League on 15 September… It wasn't long before he was one of the first names on the teamsheet. The Ligue 1 career of the Guarulhos native was launched! There is Juni, Greg, Claudio, Maloude, Sid, Djila, Abi… And there is, and will be, Cris.

The Policeman, who started alongside his favourite defensive partner Cacapa, would go on to play 310 matchs in eight seasons for OL: 225 in L1, 56 in UCL, 29 in the two French Cups. He won 4 Ligue 1 titles, 2 Coupes de France, 3 Trophées des Champions. He scored in every competition he played in: 20 goals in L1 including two braces (vs Bordeaux and ESTAC)… 3 goals in the UCL (Manchester Utd, Rosenborg, Fenerbahce), 1 goal in the Trophée des Champions (Sochaux), one in the Coupe de la Ligue (Metz) and 2 in the Coupe de France (Ajaccio and OM). He inherited the captain's armband from Juninho in 2009. He also represented the Selecao at the 2006 World Cup and played 18 times for Brazil.

Great performances and accolades for the team, but also great performances and accolades for the individual. The Policeman was named three times in the Ligue 1 Team of the Season. He was voted best central defender in the league. The Stade Gerland would chant his name... the deafening din of Cris! Cris! Cris! That made the hair on your arms stand on end. The defensive warrior played alongside 17 different players in the centre of defence: Cacapa, Müller, Diatta, Essien, Squillaci, Monsoreau, Bodmer, Boumsong, Mensah, Faure, Toulalan, Abidal, Lovren, Diakhaté, Gonalons, B. Koné and Umtiti. He freely admits his favourite was his compatriot Claudio Cacapa. What a partnership! And what an understanding with Greg Coupet and the encouragements and congratulations before and after each game. He was one of the players that you went to the Stade Gerland to see.

Those ferocious headers, the robust tackles, a charging run forward, a crips precise pass, an intelligent foul... The gestures in defence and attack, designed to encourage, inspire, intimidate... So many memories...

Eight unforgettable seasons, but there were also the hard times... the injuries... Serious injuries, like against Toulouse at the start of the 2007-08, when the knee exploded in a challenge with Elmander. He returned seven months later, at the Stade de France against the LOSC. The broken nose against PSV Eindhoven, knocked out against Liverpool. And then there were the niggling injuries in the later years.

He is without a doubt the best central defender in the history of the club... He was a monster

Perhaps towards the end he wasn't quite the enforcer he was, but he remarkable in the final of the Coupe de France against Quevilly and crucial in this year's Trophée des Champions against MHSC and again at Rennes on the opening day of the season.

Things change quickly in football, too quickly, but Cris will not be forgotten. "He is without a doubt the best central defender in the history of the club... He was a monster!" declared Bernard Lacombe. Thanks to his consistency, his longevity and everything he brought to the club, Cristiano Marques Gomes most definitely played a major role at OL…

After Corinthians (1 championship, 1 Brazil Cup), Cruzeiro (1 championship, 2 Brazil Cups), a short stop at Bayer Leverkusen and OL, the 35-year-old Cris moves on to the Turkish first division with Galatasaray. We wish him every success in his new colours!