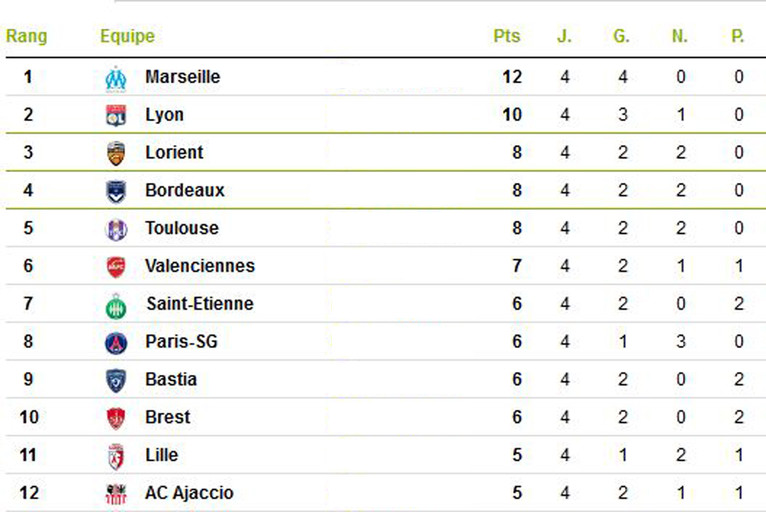 The first Europa League group stage clash takes place on 20 September against Sparta Prague. Before then, Sparta defeated Jablonec 2-1 and sit atop the standings after six games. In Spain Athletic Bilbao defeated Vallodolid 2-0 (Aduriz and Susaeta); the Basque club have three points after three matches and sit 15th in La Liga. Finally, in Israel, Hapoel Kyriat Shmona beat Maccabi Haifa 3-1 in Week 2 of the domestic league and lead the standings.

Only one Lyon player is currently out on loan: Mohamed Yattara is with Ligue 1 side ESTAC. He was in the starting line-up against Stade Brestois, playing 88 minutes and receiving excellent reviews. He has started three matches this season, playing 235 minutes. He is yet to score.

Tola Vologe will be fairly lonely place over the international break. Réveillère, B. Koné, Bisevac, Gonalons, Fofana, Grenier, Gomis, Benzia, Lopes and Umtiti will all be away on international duty.

LIGUE 1 AT THE BREAK

OGCN, ESTAC, ETG and FCSM are winless. The FCSM is the only team to have lost all four matches in Ligue 1.

OM, boast the best defence with one goal conceded.

Ibrahimovic is the top scorer with 4 goals (all four of his team's goals) from 17 shots.

31 goals scored in Week 4: the most in a round this season.

Pablo Correa was sacked as ETG coach after their loss in Week 4.