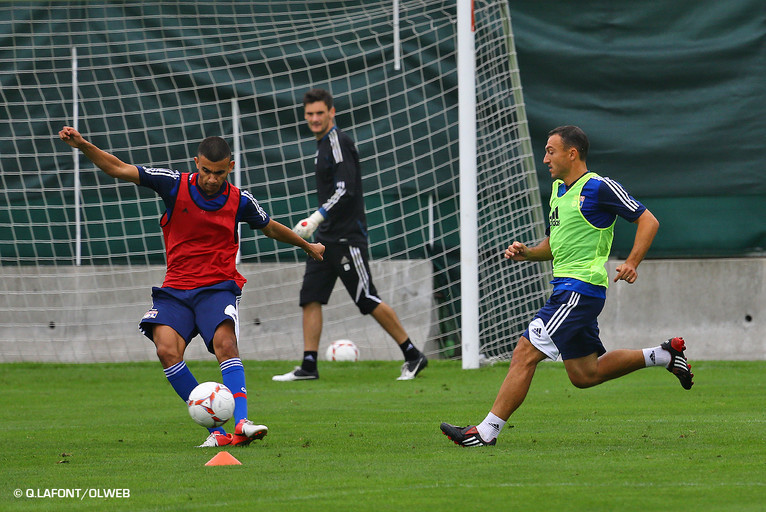 It was a varied and intensive training session for the Olympique Lyonnais squad on Tuesday, that also feature new signing Steed Malbranque after several years in England...

Tough, is perhaps the best way to describe Tuesday training session on Tuesday morning at Tola Vologe. Tough, but also varied, and intensive, run first by Robert Duverne (warm-up) then Bruno Génésio and Gérald Baticle. Lisandro and Monzon stayed indoors during training, but another South American, in the form of Roberto Cabanas was there for the second day running. No-one has forgotten the pirouettes that followed every goal from the former Lyon striker who now lives in Colombia. He was with his 15-year-old son who is trialling at OL.

Also there was Steed Malbranque, the most recent Lyon signing. Since he's been back at Tola Vologe, the former Cottager, Spur and Black Cat (419 matches in England, 58 goals, and Intertoto Cup with Fulham and a League Cup with Tottenham between 2001 and 2011), illustrates his desire and motivation to return to the top every day... in a word, his professionalism. Physically, he's very impressive, starting with his ability to get up and down the pitch, in which he is often near the top of the time sheets when the stopwatch is out. There's no cheating when it comes to the intensity and effort in each exercise.

And what a player with the ball! There's no denying the bal lis his friend. He also showed his prowess in front of goal with a series of spectacular finishes. He fights to win the ball back like 'a youngster', repositions himself... "We play like we train," is a footballer's phrase. If that's true, then it's only a matter of time before we see Steed back on the pitch. His ten months away from football (but not from sport) don't seem to have any effect at all on the player that played 110 matches with OL between 1996 and 2001, scoring 10 goals and lifting the Coupe de la Ligue.

I'm not worried. I can't wait to play at the Stade de Gerland and help the team, on show that when we want it badly enough, it's possible to comeback...

At 32 years of age and all these season at the top of his game, he exudes the maturity and experience that Rémi Garde's squad needs, just like his versatility. He also loves what he's doing. "I'm not worried. I can't wait to play at the Stade de Gerland and help the team, on show that when we want it badly enough, it's possible to comeback..." Reste désormais à confirmer toutes ses belles impressions en compétitions. "Steed is ready to play," delcared Rémi Garde, on Monday.