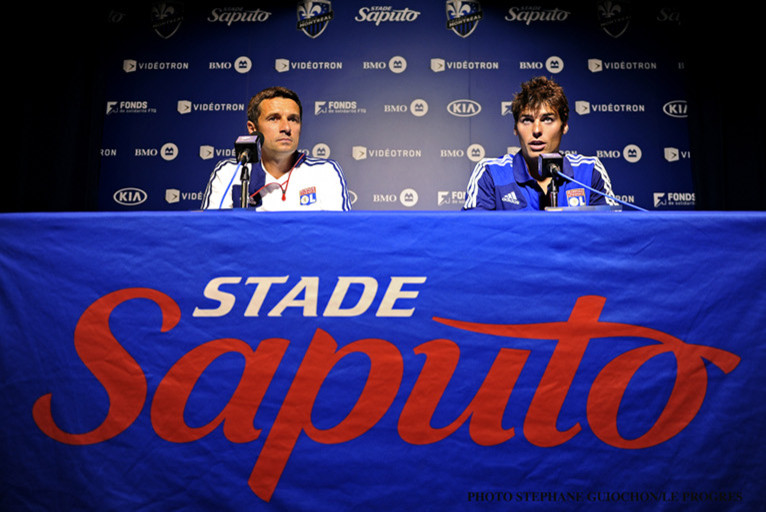 On the eve of their pre-season friendly against MLS side Impact Montréal, Rémi Garde and Yoann Gourcuff fronted up to the traditional pre-match press conference at the Stade Saputo

Yoann, what do you know about Major League Soccer ?
I try and keep a close eye on what's going on via the media. I think the standard has really improved. Montreal? I know that some great players have signed here recently. I hope we play well, continue to progress and get ready for Saturday's Trophée des Champions against Montpellier in New York.

Alessandro Nesta recently signed for the Impact and you played with him at AC Milan. What can you tell us about him?
He is quite simply one of the best. Everyone knows it. He's a world class player, an incredibly intelligent footballer. It was a pleasure to play along side him for two seasons. He's also someone who is very simple and when you play with people like him, you can't help but improve.

Your father coached Supra Montréal. Did he ever talk to you about Canadian football?
Yes, my father had a great time in Canada. We spoke about it just the other day, like we spoke about it in 2009 when I came here with Bordeaux for the Trophée des Champions. He only has good things to say about it. I love coming to Canada.

Rémi, what are you expecting from the Impact Montreal friendly match?
We've already had two good warm-up matches where the objective was to give everyone some playing time. I have a lot of young players in my squad and I want to see them in a professional environment. This third match is the last before the Trophée des Champions. So it is even more important than the previous two. Certain players will see more time than others. I hope we continue to get closer to full match readiness with a good 90 minutes under our belts.

What's the atmosphere like within the Lyon squad with so many young players in pre-season training?
The squad gets along very well. I'm very happy with the preparation we've had. We have all gelled well. Everyone is talking about the young players and it's true that we are relying on our youth academy, but we also have some very experienced and very talented players too.

Do you follow the progress of Major League Soccer?
Yes, via the media and the players we know well, such as Thierry Henry (New York). However, it's always difficult to judge the quality of a league before you play one of their teams. We get that chance on Tuesday. But when I see the US national team play, I can see that the sport has progress a lot here. They have very good results.