Marsiglia: 'We have to be wary' 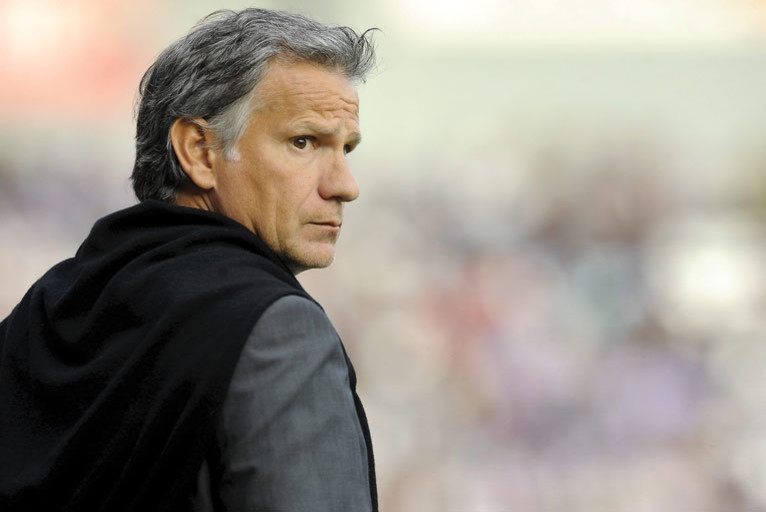 René Marsiglia was named head coach at OGC Nice on 15 November 2011. This Sunday, in the final game of the season, they visit the Stade Gerland looking for the points to ensure their Ligue 1 survival.

13th in the standings, but just one point above the drop zone, Nice are favourites to stave off relegation, but their coach René Marsiglia is not counting his chickens before there are hatched: "It's better to prepare for the worse and come to Lyon looking for a point, that way our fate remains in our own hands," he declared.

Don't you have the feeling it's going to take a whole lot of factors combined to see you in the relegation zone at 23:00 on Sunday...?
I agree, except for one small detail: this season, it's already happened several times when we have got a good result only to find out that the other results haven't gone our way at all. It's better to prepare for the worse and come to Lyon looking for a point, that way our fate remains in our own hands. With one point we are sure of playing in Ligue 1 next season. But we have to be wary because the five teams below us on the ladder could all win. That's why we need to travel here with the attitude of a team that can count on itself and no-one else. We showed against Toulouse that we could be tough in getting a scoreless draw, that we could match it with the best teams in the competition. We have to concentrate on ourselves. During the game against Evian, we didn't keep informed of the other results and we won't be doing that this Sunday either. We won't be counting on anybody else.

What do you need to do get something out of the Lyon game?
At the moment we are playing without our two best forwards in Mouloungui and Mounier. Guié Guié and Pentecôte are also out injured. But our greatest strength is the spirit we've been displaying in the last three matches. My squad has known for a long time that we were going to suffer right to the very end and that's exactly how it's going to be.

What do you think of this OL side?
I have a lot of respect for Rémi (Garde) and Bruno (Génésio). They have been irreproachable this season. I have really admired the way they have carried themselves, their control, during the tough moments they've experienced this season. I imagine they must have been under immense pressure because of the goals set at the start of the season. I really like their ideas. I get the feeling the playing squad is very attached to the coaching staff, and that's a model for me. I like the squad and despite the pressure I never saw things getting out of control or on the verge of exploding. I have the utmost respect for the club, the players and the coaching staff. I know Bruno very well because we were players of the same era and we spent some good times together [playing for Nice in the 1993-94 season), and we also did our coaching badges together. I think we are cast from the same mould. I played against Rémi (Garde). He's a very calm, stable and humble man. He stays calm and showed great maturity both on and off the pitch. I really like him.