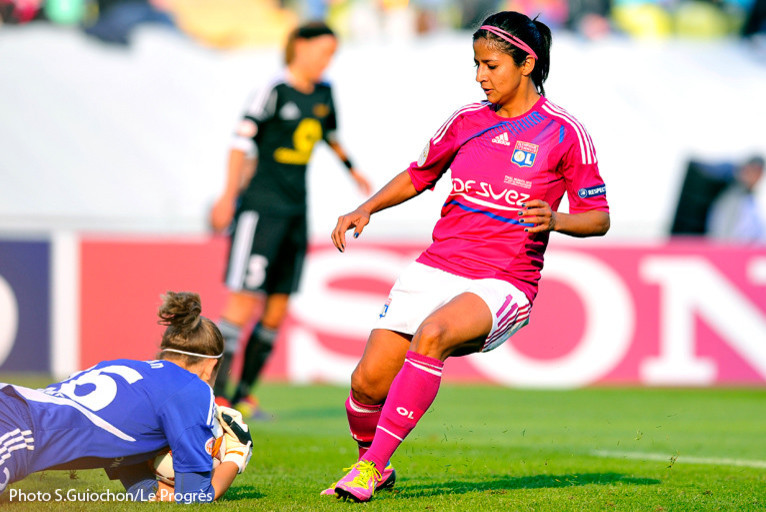 OL's Costa Rican Shirley Cruz lit up the final of the Champions League, playing an integral role in the French side's 2-0 triumph over German outfit Frankfurt in front of over 50,000 fans in Munich's Olympiastadion...

In the media shadow of her France international teammates Sonia Bompastor, Camille Abily and Louisa Necib, and OL's Sweden star Lotta Schelin, Shirley Cruz is discreet. Yet the diminutive Costa Rican is a key element in Patrice Lair's squad, and the all-conquering coach was bowled over by the individual performance: "Shirley Cruz was incredible, sensational. She played like she was from another planet."

In front of 50,212 fans in Munich, OL struggled under the Frankfurt pressing game for the opening 15 minutes, but it was Cruz that led the paved the way to victory, leading her side out of the mire. In the 14th minute, Shirley Cruz won the ball off Dzenifer Marozsàn, and burst down the left. After combining with Wendie Renard and Louisa Necib, her cross was under hit but she kept on battling to win it back and was scythed down in the area by Mélanie Behringer.Penalty! 1-0 and OL had done the hardest part in opening the scoring!

"Shishi" was also at the origin of the second goal. It was her pass that released Lotta Schelin, with a little chip over the top. Camille Abily took advantage of Désirée Schumann mistake to net the second with a delicious lob - 2-0 after just 28 minutes. The hyperactive Costa Rican was everywhere!

On this historic evening in Germany, the 26-year-old captain of the Costa Rica national team shone like a beacon! Constant pressing, incessant harassing of the opposition, tactical intelligence and technical finesse: the full spectrum from this elite competitor. In Munich on Thursday, whe wasn't content with her usual defensive duties. She burst forward, launched her side's attacks and followed them up! She could even have got her name on the scoreboard from a Eugénie Le Sommer cross (28'), or provided an assist for Camille Abily whose shot was cleared by Schumann (71'). She also won a free-kick that Abily rifled against the crossbar (81').

The battle for Player of the Final was fierce and UEFA handed that to the excellent Camille Abily, but L'Equipe named Shirley Cruz as the key player in the final and entitled an article "The Grand Cruz" giving the midfield dynamo 8/10. Her teammates paid tribute to her as they returned to France overnight.

Shirley Cruz is a truly great player. Her smile lights up the Lyon changing room, her professionalism is a benchmark for coach Patrice Lair, her performances are integral to OL's play. Muchas gracias para todo "Shishi" Cruz!