A solid win for OL 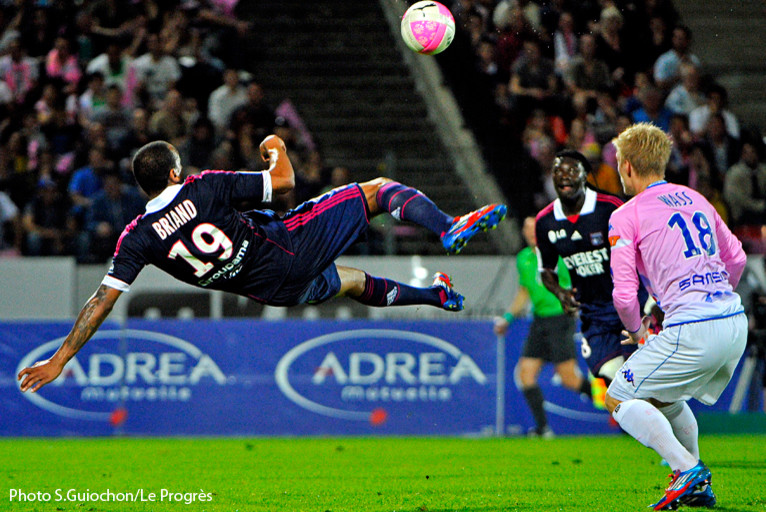 After an even first half, Olympique Lyonnais finished over the top of their hosts, Evian Thonon-Gaillard to record a 3-1 win and confirm their fourth place on the table with one Ligue 1 match left to play...

The opening minutes were even and open as both sides looked to get forward and attack. Max Gonlaons fired the first shot in anger, forcing Andersen, in the Evian goal, to concede a corner (8'). The home side's full-backs were lively and it was from an inch-perfect cross from one Wass raid down the wing, that Sagbo opened the scoring for ETG. The visitors lacked a cutting edge in their attacks and largely failed to threaten the Evian goal. As so often this season, Les Gones found the breakthrough from a set piece. The precision corner from Yoann Gourcuff found the head of Bakary Koné to equalise (23'). This goal seemed to spark OL into action.

Briand almost fired OL in front with a powerful header from a Cissokho cross (29'). Moments later, Rabiu found himself one-on-one with Hugo Lloris with the France 'keeper coming out on top (32'). Seconds before the half-time whistle, Rabiu collided with Lloris in another dangerous situation that came to nothing for the home team (44').

OL began the second half with a stunning team move that concluded with Briand heading just over (48'). M'Madi then had a great chance for Evian as he took advantage of a misunderstanding between Cris and Lloris to header agonisingly wide (56'). OL were in control of the ball with Les Savoyards attacking on the counter attack. Hugo Lloris was still forced into action by a Wass free-kick that was arrowing towards the top corner (67'). Olympique Lyonnais finally went ahead after some fabulous play by Gomis down the right. The OL striker's cross was palmed out by Andersen but Jimmy Briand was the first to react with an acrobatic finish for 2-1 (68'). Kim Källström then hit the crossbar with a cross-cum-shot from the left (72'). With ten minutes left on the clock, Lloris flew to turn a thunderous Rabiu shot against the crossbar and Jérémy Pied carved out a great chance only to fire centimetres wide (89'). In stoppage time, Lisandro lost his own one-on-one with the opposition 'keeper. There was still time for Alex Lacazette to earn a penalty which he put away under the gaze of regular taker Lisandro (92'). Rémi Garde's side take all three points and confirm their fourth place on the ladder.