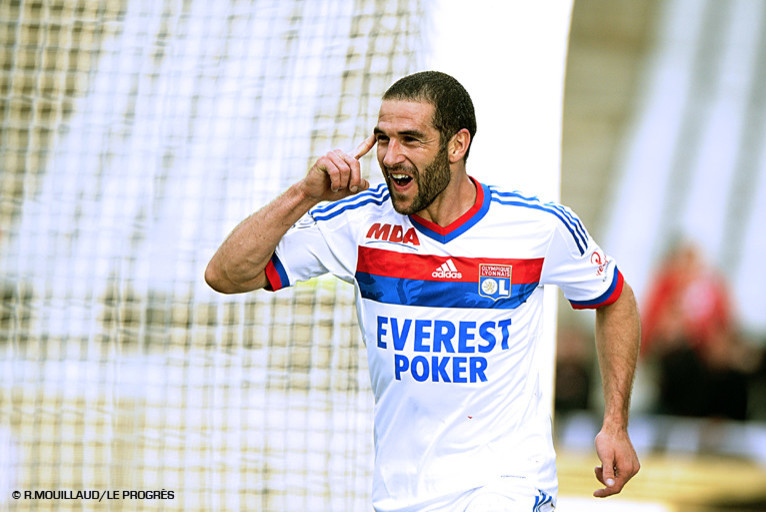 Olympique Lyonnais backed up from last weekend's Coupe de France triumph with a comprehensive 4-1 victory over Valenciennes in Week 35 of Ligue 1...

Buoyed by their Cup success, Les Lyonnais were looking to finish the season in the best possible manner, starting with the Week  35 visit of relegation-threatened Valenciennes to the Stade Gerland.
Coach Rémi Garde made several changes to his starting XI, naming the following side at kick-off: Lloris, Dabo, Cris, B.Koné, Cissokho, Fofana, Gonalons, Gourcuff, Briand, Lisandro, Lacazette.

Despite a huge storm that emptied torrential rain over the pitch in the afternoon, the playing surface looked in good condition and the home side clearly had the better of the opening exchanges. Yoann Gourcuff was played in by Lacazette but, with only Penneteau to beat, he fired just over (3'). Rémi Garde's men clearly had the upper hand but couldn't breakdown the northerners rear guard. Alex Lacazette then saw penalty appeals waved away when he was upended in the area (25').

Lacazette was leading the OL attack and stung the palms of Penneteau with a stinging low drive (28'). Les Gones finally went ahead after a quickly-taken free-kick released Alex Lacazette down the right and his cross was volleyed home by Lisandro with the help of a deflection (36'). But the lead wasn't to last long. Less than a minute later, Cohade found himself clean through to take on Lloris before going down under the challenge from Cissokho. If there was a foul, it seemed to be outside the area but the referee, Monsieur Rainville, pointed straight to the spot and Cohade sent Hugo Lloris the wrong way to level things (37'). The two sides headed to half time locked at one apiece.

The away side looked decidedly more dangerous in the second half. Hugo Lloris kept his side in it with a smart save to deny Dossevi (55'). Moments later Samassa headed just wide of the post. OL's first-half domination had completely disappeared. On the back foot, OL got the breakthrough from a set piece. Cris' powerful header home from substitute Grenier's free-kick gave OL the lead (68'). Just three minutes later, Lisandro struck again to send the Stade Gerland into rapture (71'). Les Gones were back in control and closed the game out in style. They even added a fourth goal at the death with Jimmy Briand taking full advantage of some excellent lead up play by Jérémy Pied.