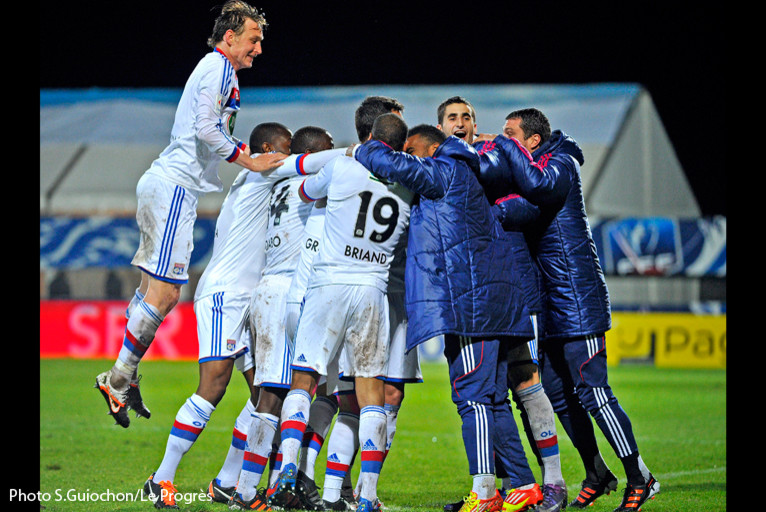 Olympique Lyonnais booked their place in a second final this season at the Stade de France, defeating Gazélec Ajaccio thanks to four second half goals.

Les Lyonnais had the chance to make it two trips to the Stade de France this season, but to make it happen they had to defeat Gazélec in Ajaccio, in the Coupe de France semi-final. The third division islanders had already eliminated Troyes, Toulouse and Montpellier.
Rémi Garde started his strongest possible XI: Lloris, Réveillère, B.Koné, Lovren, Dabo, Gonalons, Källström, Briand, Lacazette, Lisandro, Gomis.

In a white hot Stade François-Coty, OL started the game in enterprising fashion. With barely two minutes on the clock, Kim Källström drew a first save from the home side's 'keeper. But the hosts responded just minutes later when Colloredo, an OL youth product, hit the post after a good move, back to goal (9e). Immediately up the other end Jimmy Briand hit the cross bar after beating his man. The match was being played at a cracking pace. Les Lyonnais reimposed their dominance on proceedings.
Bafé Gomis sent a thunderous shot just past the post (30'). Verdier still forced Lloris into action with a powerful free-kick from just outside the box (34'). The home side then upped the ante in the aggression stakes. Colinet was given a straight red card for a tackle on Alex Lacazette (39'). The tackles were flying in and the referee, Mr Ennjimi, was in danger of losing control of the game. At the end of the first half OL carved out two gilt-edged chances but Bastello produced another top drawer save to deny Briand's header and then turn Källström's free-kick onto the crossbar (45').

The start of the second half Dominique Veilex's side then hit the woodwork again through Seymand's shot. That made it 2-2 for the posts! Les Gones set up camp in Ajaccio's half of the field. Bastello then saved from Lisandro before finally succumbing a few minutes later.  Jimmy Briand shot straight at the GA 'keeper, but Alex Lacazette followed up to knock the rebound home (59'). The hardest part had been done with OL ahead on the scoreboard and a man up too.
Lisandro doubled the advantage with 15 minutes left to play after good work from Anthony Réveillère (74'). The goal ended the game as a contest. The Argentine was replaced by Clément Grenier who added a third with one of his first touches and a magnificent lob over the 'keeper for his first professional goal (80'). Gomis added his name to the scoresheet in the final minute as Rémi Garde's side got the job done and booked their tickets to the Stade de France for the second time this season...

Tickets for the final of the Coupe de France will go on sale for everyone on Thursday 12 April at 10:00 CET.