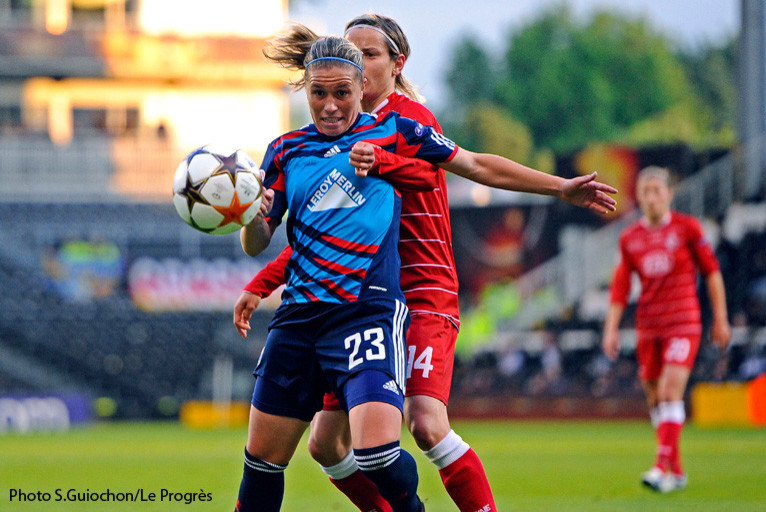 After sweeping aside Danish champions Brondby in the Champions League quarter-finals, Olympique Lyonnais will be reacquainted with old rivals in the semis in the form German outfit Potsdam...

QUALIFICATION À BRONDBY
On Wednesday, OL booked their place in the final four of the Champions League away to Brondby. After winning the first leg 4-0 last week, Les Lyonnaises followed up with another 4-0 decimation of their Danish hosts. "We were focused and played well, even though that wasn't easy after such a big win in the first leg. Camille Abily opened the scoring for us and that set us on our way," analysed coach Patrice Lair.

The OL midfielder scored from a free-kick after just ten minutes thanks to a fumble from home side 'keeper Stina Petersen. Elodie Thomis then doubled the lead with a stunning counterattack just before the half-time break. In the second half, Eugénie Le Sommer netted a brace, sending her to the top of the goal-scorers' charts with eight strikes. New Japanese signing Ami Otaki came off the bench to make her debut in a Lyon shirt.

On Thursday, German side Turbine Potsdam also earned a semi-final berth thanks to a 3-0 win over Rossiyanka, thanks to a Chorna own goal and a Yuki Nagasato double. The German side had won the first leg 2-0 and will now play a huge semi-final against OL - a match that could easily have been the final. "It's the fifth time in a row that we've made the semi-finals. We really are part of the Big 4 of Europe," explained Camille Abily. "But the next tie against Potsdam will be very, very tough."

Turbine Potsdam and Olympique Lyonnais have met in the last two Champions League finals. OL lost the first, on penalties in 2010 in Madrid, before getting their revenge in last season's final in London, 2-0. Les Lyonnaises host the first leg on Sunday 15 April, the day after the Coupe de la Ligue final between the Lyon men and Marseille. The return leg will be played a week later in Potsdam. The other semi-final pits another German side in Frankfurt against English outfit Arsenal.