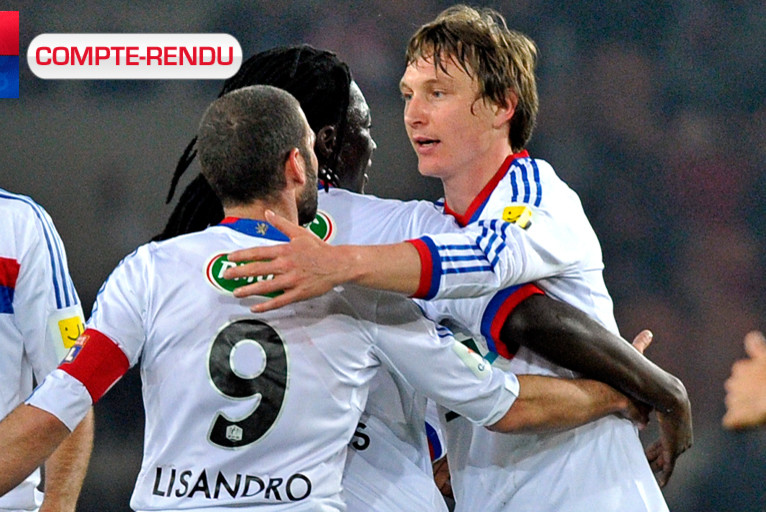 Olympique Lyonnais recorded a stirring 3-1 win away to Paris Saint-Germain at the Parc des Princes on Wednesday to qualify for the semi-finals of the Coupe de France.

Les Lyonnais made a bright start and controlled possession against a very physical PSG. Bafé Gomis twice tried his luck from distance but both failed to hit the target. 15 minutes into the game, OL was stunned by a harsh penalty in Paris' favour after Samuel Umtiti was adjudged to have handled in the box. Monsieur Turpin pointed to the spot to general surprise in the Lyon ranks. Nene stepped up and converted from 12 yards out (18').
Spurred into action the away side equalised just moments later via the left boot of Kim Källström who dispatched a stunning free-kick into Douchez's top corner (25'). Menez was causing plenty of problems with his dribbles into the OL defence and one such run ended with a cross for Gameiro who was denied by Lloris (33'). Les Gones then took the lead when Källström's cross to the back post was turned home by Lisandro (39'). The lead was little more than Licha and Co. deserved. Nene still had time to create another good chance for the home side, but Hugo Lloris made a smart save.

Trailing at half time, Ancelotti brought on Pastore for Bisevac as Jallet dropped to right-back. The capital club stepped on the accelerator at the start of the second half and Hugo Lloris was called on to save from Jallet's volley (50'), Menez's missile (52') and then Matuidi's shot (59'). The Parc des Princes was pushing its side towards an equaliser. Michel Bastos replaced Jimmy Briand (60'). Dejan Lovren and Co. were under the hammer, but standing firm.
Sitting on a yellow card, Thiago Motta committed a number of further fouls without referee Turpin reaching for the red. Lisandro and Grenier were replaced by Dabo and Bako Koné as the Lyon coach threw on his defensive reinforcements. Lyon then killed the game off in stoppage time thanks to a penalty earned by Michel Bastos and put away by Bafé Gomis. OL ran out 3-1 winners, inflicting a first defeat on PSG in 2012 and qualifying for the Coupe de France semi-finals in the process.