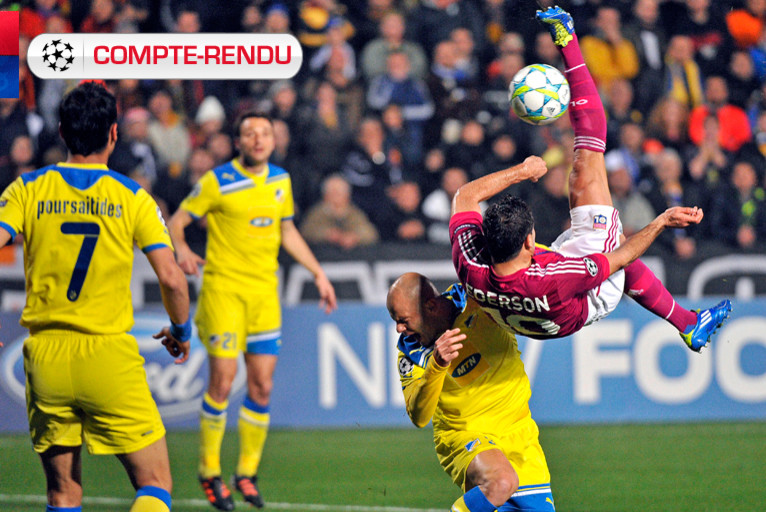 After trailing to an early goal, Olympique Lyonnais were unable to get that crucial equalising goal in 120 minutes and the APOEL 'keeper was the hero in the penalty shootout...

After their 1-0 win over APOEL Nicosia in the first leg, OL travelled to Cyprus with in the box seat as they looked to qualify for the quarter-finals of the Champions League. Rémi Garde went with the same 4-2-3-1 formation from the Stade Gerland three weeks earlier with just one change: Jimmy Briand replaced Alex Lacazette on the right side. OL starting XI: Lloris, Réveillère, Cris, B.Koné, Cissokho, Gonalons, Källström, Briand, Bastos, Ederson, Lisandro.

The match got underway in an electric atmosphere and OL were caught cold as Manduca levelled the tie (9') as both Cris and then Antho Réveillère tried to intercept the teasing cross from the right, in vain. Rémi Garde's side bounced back immediately as Chiotis tipped over a goal-bound Ederson free-kick (24'). Lyon had another great chance when Ederson, again, sent his header from a Bastos cross just wide of the mark (38').

Les Lyonnais tried to make the running but every turn over released the dangerous Cypriot team on another cutting counterattack. Solari went desperately close to punishing OL on one such counter, but Hugo Lloris saved with his feet (42'). At half-time the tie was evenly poised at 1-1...

The tension was still rising at the start of the second period. Cris and Oliveira got into a wrestling match in the OL box (50'). Aly Cissokho was within centimetres of beating his own 'keeper as he glanced a header onto his own crossbar (55'). Les Gones were on a knife edge, alternating the average with the less good. Licha headed goalwards only for Chiotis to turn it behind for a corner (72'). Bafé Gomis replaced Ederson midway through the second half (72'). OL were being expertly closed down and rarely created the breach in the Cypriot ranks. Extra-time would be required to separate the two sides.

OL pushed hard, especially in the second half of extra-time, but the APOEL defence would not budge. Källström's free-kick was fliecked just wide by an APOEL defender. OL were starting to find their marks with set pieces and Gonalons and Koné went close to the equaliser from two Källström corners (103'). APOEL were struggling physically as the game continued. Lyon gave it everything, but neither Lacazette, nor Lisandro could get a shot away after good lead up play. The knockout blow seemed just seconds away as APOEL finished the match with ten men after Manduca was shown a red card (114'). After 120 minutes, the two sides were still tied 1-1 on aggregate and penalties were required to separate them!
The first three penalties for each side were successfully put away before both Alex Lacazette and Michel Bastos saw their spot kicks saved by Chiotis and OL were eliminated 4-3 on penalties.