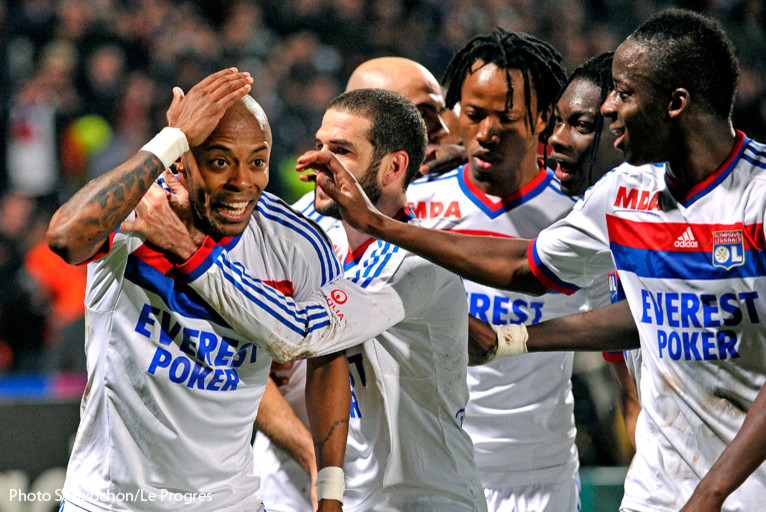 At the end of an incredible match of football, Olympique Lyonnais were held to a 4-4 draw at home to Paris Saint-Germain and dropped further ground in the race for a top three finish...

It would be an understatement to say that the Stade Gerland had understood the importance of this evening's game. The OL fans were in great form and the atmosphere inside the stadium was electric. As a result, the match took off at 100 miles per hour. In the opening minute, Jimmy Briand failed to make good contact with a Réveillère cross. Just moments later Bafé Gomis forced Sirigu to tip over a good effort. Les Gones had the upper hand early. The Parisians didn't take long to get into the game, though. Hugo Lloris produced a first decisive save to deny Pastore's header (17'). Unfortunately, the OL 'keeper could do nothing to prevent Hoarau opening the scoring with a perfectly placed shot after a low Menez free-kick (20'). The France international striker then went within a whisker of doubling PSG's lead (29').

Rémi Garde's side tried to bounce back and Bafé Gomis forced Sirigu into another stop. After dribbling Alex, Briand then brought the best out of Sirigu again. But in the following minute Bafé Gomis equalised with a magnificent volley from a Källström cross (33'). Far from settling down, the game took off. Lisandro quickly gave OL the lead finishing off an Michel Bastos-led counter. And less than 5 minutes later again, Michel Bastos produced a veritable chef d’œuvre to double fire the home side two goals to the good with a half volley that flew into the top corner of Sirigu's goal. The Stade Gerland erupted - within 10 minutes OL had totally turned the match on its head! PSG then received a generous penalty to reduce the margin to 3-2 at the break, after Nene slotted home the spot kick.

The match was just as intense after the restart as the ball flew from one end of the pitch to the other. Jimmy Briand restored the home side's two-goal cushion, headering home a Bastos corner (57'). Les Lyonnais were in irrepressible form and a changed side from recent Ligue 1 outings and defeats to Caen and Bordeaux. PSG pushed forward looking to salvage some pride. It was the substitute Ceara that got the capital club back in the game with a shot that fizzed low and beyond Hugo Lloris and suddenly it was game on again at 4-3 (73'). Having shined so brightly for most of the match, Lisandro and Co. began to tire and Ederson replaced Jimmy Briand, only to blast a first effort high. Nene then thought he'd equalised only for Hugo Lloris to produce yet another miraculous save (82'). Bodmer, then missed the target with the goal at his mercy (87'). Right at the death, even the PSG 'keeper came up for the set-pieces. With one final ball into the area Hoarau managed to head home a late, late equaliser. It was an incredible match of football, but a bad result for Les Gones in terms of the ladder...