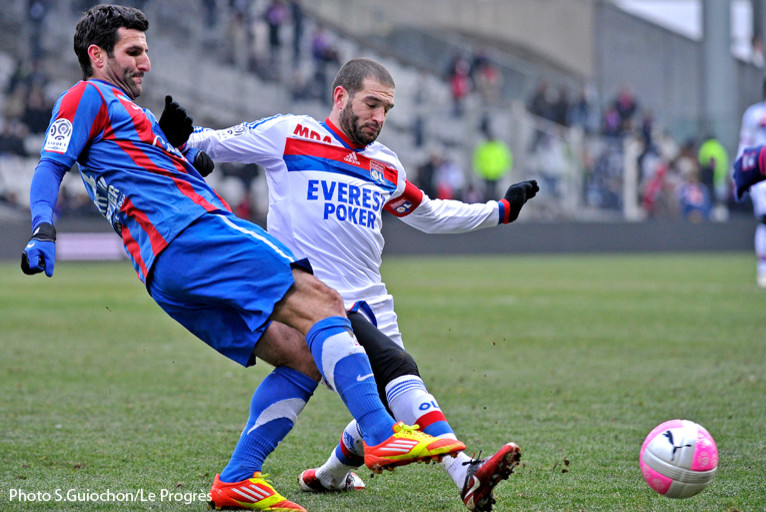 On a freezing Saturday afternoon, Olympique Lyonnais went down to a 2-1 home loss to Caen at the Stade Gerland in Week 23...

Despite the match being brought forward to 15:00 CET, the temperature was well below zero at kick-off. Kim Källström was suspended for the home side. OL at kick-off: Lloris, Réveillère, B.Koné, Umtiti, Cissokho, Gonalons, Grenier, Briand, Bastos, Lisandro, Gomis.

Les Gones imposed themselves on the game early and enjoyed the better of the opening exchanges. Clément Grenier hit a free-kick just wide (7'). Up front for the visitors, the youngster Niang came off with injury, replaced by Nabab. However as OL have developed a habit of doing in recent weeks, they conceded the opening goal. Released down the right, Hamouma fired his shot across Hugo Lloris and inside the far post (12'). Les Olympiens struggled to create any real danger for the Caen backline. At the other end, Frau forced Lloris to punch over his own crossbar with a long range effort (24'). Les Gones were simply making too many mistakes. Bafé Gomis had a chance to even things up just before half time, but fired wide on the volley. The Stade Gerland had witnessed a very average OL in the first 45 minutes.

Lisandro and his teammates came out after the break looking for the equaliser. Bafé Gomis saw his header fly just wide from Réveillère's cross (52'). OL received a few good free-kicks but didn't make the most of the set piece opportunities. The Normandy side was very well organised, sat deep and afforded very little space to the home side and they doubled their lead on the counterattack. Played in by Nivet, Nabab hit a volley that flew into the top corner of Hugo Lloris' goal (73'). The afternoon match was turning into a nightmare. Brought down in the area, Alex Lacazette earned a penalty that Lisandro put away to put OL on the scoreboard (86'). But the comeback was to remain incomplete.