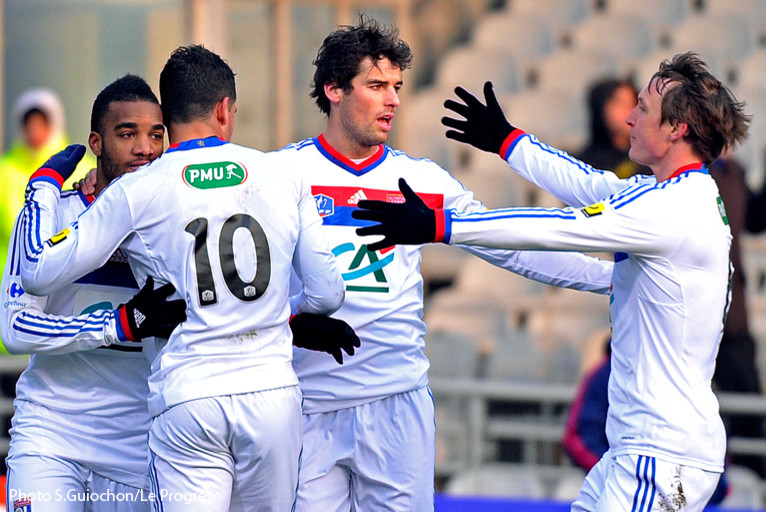 Olympique Lyonnais had to wait for extra-time before seeing off Bordeaux and qualifying for the Couope de France quarter-finals...

OL at kick-off: Lloris, Réveillère, Cris, B.Koné, Dabo, Fofana, Källström, Lacazette, Gourcuff, Ederson, Lisandro.
From the very first minute, Les Olympiens tried to warm up the fans braving the cold with a couple of long-range efforts, without causing any real problems for the visitors. Rémi Garde's side were dictating the rhythm, but struggled to find openings in the final third of the pitch. Les Gones were making all the running, but it was Les Girondins that opened the scoring on the counterattack. Gouffran released Jussie who fired past Hugo Lloris from just inside the area (23'). Les Lyonnais tried to bounce back immediately with a Yoann Gourcuff free-kick that flew just wide of the mark (26'). A turnover in midfield set off another Bordeaux counterattack that ended with another Gouffran shot that flashed just wide.

Les Gones were back on level terms when a visionary pass from Gourcuff towards Ederson saw the Brazilian lose out to Carrasso, only for Alex Lacazette to push the ball into an empty net (36'). It was 1-1 at half time.

Ederson fired the first shot of the second half with a shot that fizzed just over (49'). Lisandro then hit a half-volley wide after a nice cut back from Ederson (54').Les Gones looked to drive home their advantage. Cédric Carrasso produced a great save to maintain the status quo from Alex Lacazette (59'). Lisandro then twice had the ball in the back of the net, only for the linesman's flag to deny him both times. Rémi Garde's men were directing traffic, while Bordeaux were looking to hit on the counterattack, but threatened only rarely. Alex Lacazette went close to netting a double but Carrasso produced another stunning save (78'). In the last five minutes, Kim Källström and Co. laid siege to Carrasso's goal, but there was no way through. Unfortunately, the dreaded extra-time was needed to decide this one.

The Stade Gerland didn't have to wait long for the goal. A sliced volley off the boot of Briand turned into an assist for Bafé Gomis who drilled the ball beyond Carrasso from a tight angle (96'). The goal cut the heart out of Bordeaux. A magnificent move led by Källström and Briand looked to take the game beyond Les Girondins but Carrasso again saved the day from Lacazette's curling effort  (110'). The home fans were then rewarded for their loyalty with a simply wonderful third goal, which ended with a Lisandro cut back for Briand to put the ball in the back of the net (118'). OL had their ticket to the Coupe de France quarter-finals.