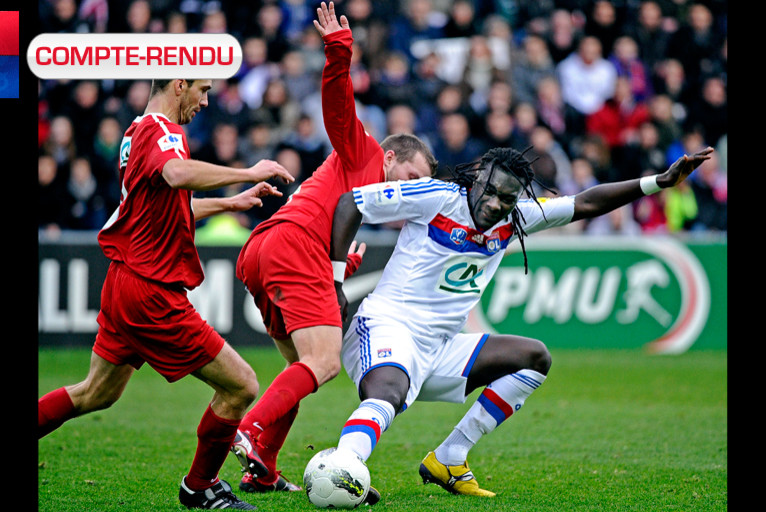 Not without difficulty, Olympique Lyonnais overcame an audacious Luçon team 2-0 to book their place in the last 16 of the Coupe de France.

After seeing off Lyon-Duchère in the round of 64, Les Lyonnais were again hot favourites to overcome the amateurs from Luçon. OL at kick off: Lloris, Dabo, Gonalons, Umtiti, Cissokho, Fofana, Källström, Pied, Bastos, Lisandro, Gomis.

Right from the outset, Luçon looked to match their professional counterparts. Mayenga had the first shot in anger, but without success (5'). A few minutes later Germann saw his volley flash just centimetres wide. Frédéric Reculeau's players were putting on a how against OL. With half an hour gone, OL were clearly the second-best side. Jérémy Pied tried to turn things around, finding Lisandro, but the Argentine's shot was comfortably claimed by Leclere (31'). Lisandro, again, started a move that ended with Gomis' shot saved by the Luçon 'keeper (41'). Bafé Gomis was seeing plenty of the ball, but he just couldn’t make the breakthrough as both sides continued to have chances to open the scoring.

The second half started in much the same vein. The side from Vendée remained impeccably organised, stopping OL from playing their natural game. Bafé Gomis created a great chance, but Leclere was again in the right spot to make the save (64'). As the minutes passed, the game went end to end. Michel Bastos then shot over on the counterattack (70'). Lyon began to flex their muscles. Fed in the service, Bafé Gomis beat his man before rifling a deflected shot into the back of the net (75'). Luçon then went within a whisker of an equaliser, but the post came to OL's rescue to deny Mayenga (80'). OL then doubled their advantage in the final seconds as Lisandro finished off a counterattack (90'). They did it the hard way, but in the end OL booked their place in the last 16 of the Coupe de France.