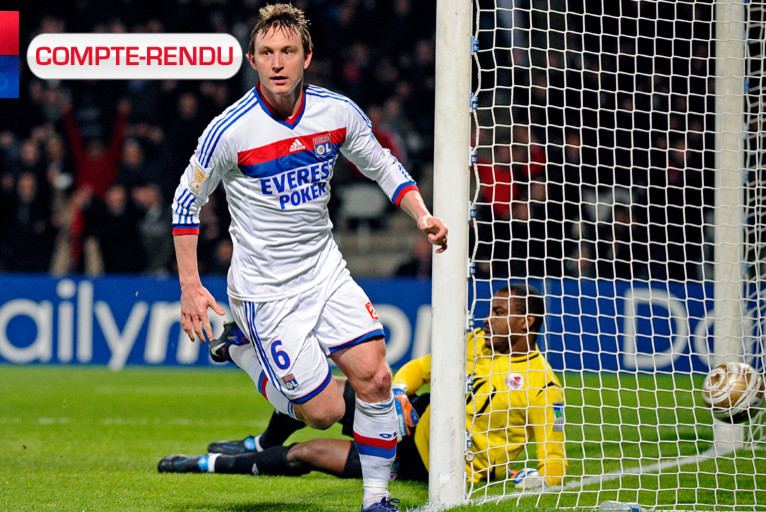 Reduced to just ten men early on, Olympique Lyonnais dug deep and found the resources to come from behind for a courageous Cup victory.

OL hosted LOSC, defending Ligue 1 champions, in the Coupe de la Ligue quarter-finals. After picking up a knock in the final training session before the game, Bafé Gomis sat out the game, as did defender Dejan Lovren, who withdrew early in the warm up.

Les Olympiens tried to impose themselves on proceedings early, with Källström and then Gourcuff both shot at Enyeama's goal without success (5'). Lille went close with a near-post corner that Balmont sent just wide. The former Lyon man then drew an incredible save from Hugo Lloris thanks to his long-range deflected shot. Unfortunately OL's job got that much harder when Dabo was sent off for a tough tackle on Bonnart (10').

Monsieur Duhamel's decision seemed a little harsh on the OL full-back. Michel Bastos, repositioned at right-back, then saved his side from Mavuba's effort after a good move from the northerners (24'). Rudi Garcia's side then opened the scoring through Joe Cole who, released at the very limit of offside, beat Hugo Lloris with a powerful shot from the edge of the area (28'). Les Gones were clearly unhappy with the refereeing as the tension rose out on the pitch. Lyon then equalised via a Bastos free-kick that Enyeama could only parry into the path of Kim Källström who made no mistake (41'). The Stade Gerland was on edge and veritably exploded after the Swede's goal. The perfect time to equalise, just before the break.

Lille enjoyed more of the ball at the start of the second half. Introduced moments earlier, Jelen headed wide of Lloris' goal (60'). OL were under the cosh and struggling to play the ball out of defence. Despite that, it was Rémi Garde's side took the lead through Lisandro who took advantage of a monumental raid down the right wing from Bastos (66'). The goal, coming as it did, against the run of play, rewarded the entire Lyon squad for their hard work and solidarity. For his part, Licha continued his rich goal-scoring form after his braces against Bastia and then in the Coupe de France against Lyon-Duchère. The excellent Balmont then let his former club off - rifling over after Lloris had boxed clear (73'). The two sides finished the match with ten men after Debuchy confused the ball with... Lisandro (82'). The Stade Gerland was in rapture in the final minutes... Cissokho went on a twisty run that almost saw Lisandro add another (87'). Les Olympiens stay united and showed great solidarity as their gutsy performance saw them book their place in the Coupe de la Ligue semi-finals.