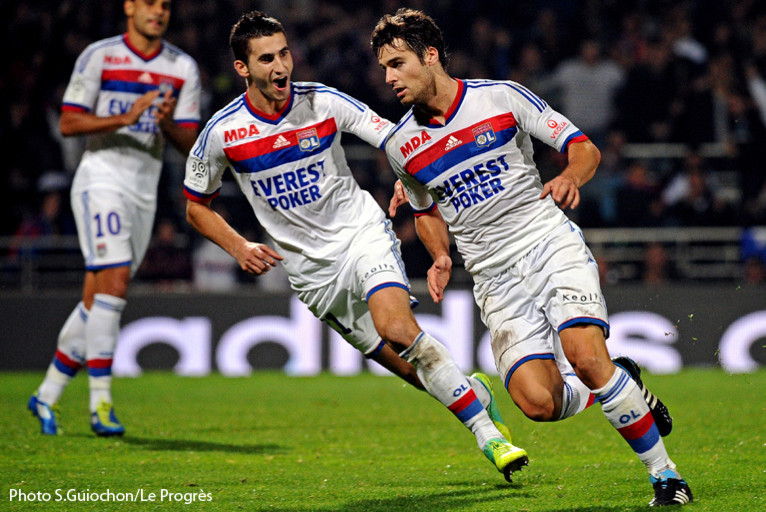 OL recorded a second derby win over archrivals Saint-Etienne in just three days, 2-0, despite playing much of the game with just ten men!

OL hosted ASSE, after a 2-1 win away to Saint-Etienne three days earlier in the Coupe de la Ligue, in a capacity-packled Stade Gerland.

Les Gones started in style and enjoyed a series of set pieces to pile the pressure on the visitors. Released over the top, Aubameyang missed the target against Lloris but it was a real scare for the home fans (9'). The midfield battle was fierce as neither side gave away any space. Aly Cissokho tried his luck from a tight agnle but it flew just wide (25'). Both sides were dangerous on the counterattackas Alex Lacazette attacked Ebondo's right-back to cross for Bafé Gomis who fired agonisingly wide (35'). The first half ended with a Yoann Gourcuff free-kick that flashed just over Ruffier's goal.

Rémi Garde's side upped the ante in the second half. The game took a huge turning point when Mouhamadou Dabo, who had replaced Aly Cissokho at the break, was sent off for a tackle on Nicolita. The ASSE player got up quickly enough once the red card had been produced for his opposite number. The match was fiercely competitive and still OL faild to take advantage of a number if set pieces. Briand fought hard to set up Lacazette but his shot was captured by Ruffier (59'). Monsieur Chapron was proving lenient as the tackles flew in, most notably on Kim Källström (64'). OL went closest to breaking the deadlock when Briand's header brought a fantastic save from Ruffier (72'). Despite playing a man down, Yoann Gourcuff and Co. pushed for the winner in the final 15 minutes. And their efforts were rewarded ten minutes from time when Bafé Gomis flicked on Yoann Gourcuff's corner to Jimmy Briand who headed home from close range (81'). The Stade Gerland erupted. Aubameyang and then Sinama Pongolle tried to catch out Hugo Lloris before Yoann Gourcuff intercepted a Paulo pass to chip the advancing Ruffier, and make the game safe for OL. A brilliant goal that almost brought the house down! This week will live long in the memory for back to back wins over the old enemy, just three days apart.