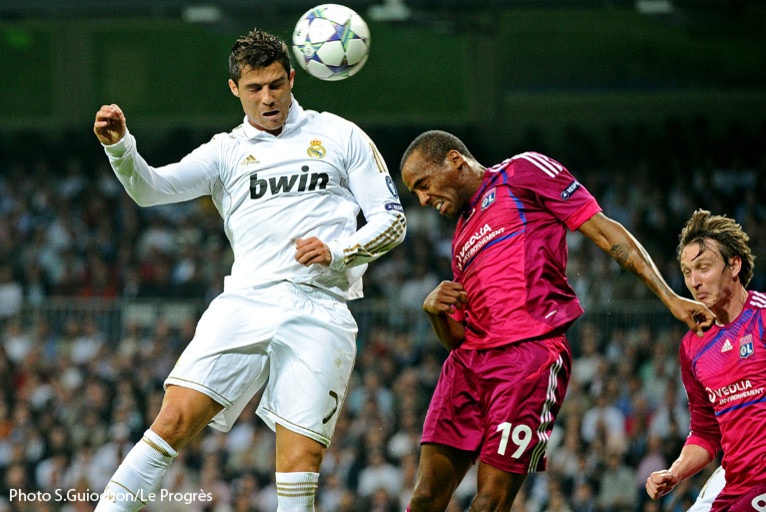 Dominated in every department, Olympique Lyonnais suffered a heavy defeat at the hands of an excellent Real Madrid.

OL were on the road to the Estadio Santiago Bernabeu to take on the mighty Real Madrid on Match Day 3 of the Champions League.

The home side set up camp in OL territory from the outset. Cristiano Ronaldo provided the first scare, but a watchful Hugo Lloris in the Lyon goal punched the ball clear (7'). Moments later, Jimmy Briand sent a diving header just wide of Casillas' right-hand upright. Rémi Garde's side were struggling to make inroads into Real territory and te home side made the breakthrough from a corner, flicked on by Ronaldo and turned home by (who else?) Karim Benzema (19'). Les Gones were making too many mistakes and were punished. Jimmy Briand created a second chance but couldn't hit the target from a tight angle (25'). OL did have the ball in the back of the Madrid net, but the goal was correctly ruled out for offside against Bafetimbi Gomis (28').  The home side monopolised possession in the closing stages of the first half.

Lyon then made a catastrophic start to the second half. Benzema took advantage of a slip from Bako Koné to break down the left and cross for Khedira who made no mistake in beating Hugo Lloris for goal number two (47'). Outplayed, Lyon conceded a third goal when Lloris turned Ozil's cross into his own net (55'). Real Madrid kept coming in wave after wave and only an excellent Hugo Lloris stood between Real and a tennis score. The second half seemed an eternity to OL fans, even if the introduction of Ederson midway through the second period gave the French side a second wind. Unfortunately, Sergio Ramos added another goal for Real from a corner to make it 4-0. Despite a few raids in the dying seconds, Lyon were unable to get on the scoresheet. It was a heavy defeat that OL needs to overcome as quickly as possible.