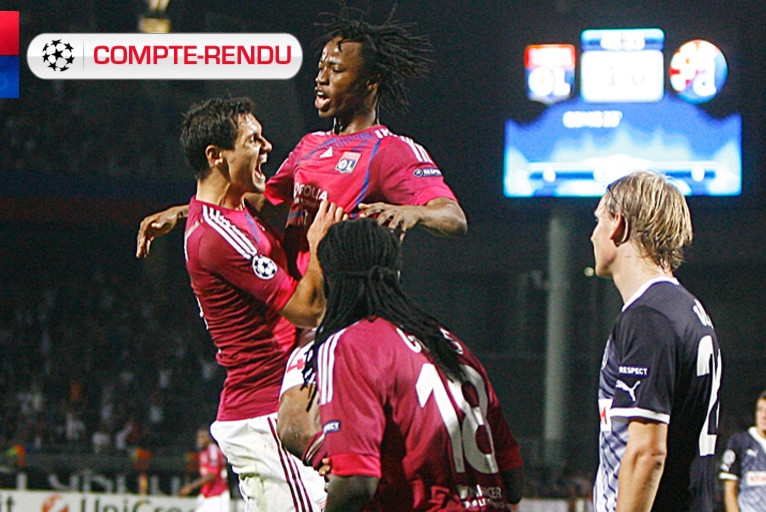 Olympique Lyonnais moved second in their Champions League section, behind Real Madrid, after a comfortable 2-0 home win over Dinamo Zagreb thanks to first-half goals to Bafetimbi Gomis and Baky Koné...

Dinamo Zagreb visited the Stade Gerland on Match Day of the Champions League and the Kop Virage celebrated the moment with a great homage to the home side for a 12th consecutive group stage participation in Europe's premier club competition.

Les Gones began the game in style and with just two minutes on the clock, Bafé Gomis somehow contrived to miss with the goal at his mercy after a Clément Grenier cross. 15 minutes in and it was Max Gonalons' turn to go close to opening the scoring after a goal-mouth scramble, only to fire high. The breakthrough finally came thanks to a through ball for Bafé Gomis. From 20 metres out, the Olympique striker chipped the ball over the Croatian 'keeper and into the back of the net for a majestic opener (23'). It was the type of goal that only in form and confident forwards score. However, the visitors weren't about to lie down. Beqiraj wasn't far away from getting on the end of an Ibanez cross (30'). Bafé Gomis, again, found himself totally unmarked just five metres out with only Kelava to beat, but he fired wide (37'). Rémi Garde's side then took the game beyond their guests just before half time when Grenier's corner was turned home by Bakary Koné (42'). Clément Grenier even had the chance to add a third before the interval, only to be denied by Kelava (44'). The Czech referee's half-time whistle sent Lyon to the break with a comfortable two-goal lead.

OL began the second half as they finished the first and while they didn't create a host of scoring chances, they never lessened their tight grasp on the result and were always in total control. With one eye on this weekend's huge Ligue 1 clash against Paris Saint-Germain, Bafé Gomis made way for Alex Lacazette early in the second period. Kim Källström and Hugo Lloris were both called upon to diffuse two Dinamo corners (70'). The only negative thing about the evening was Clément Grenier's substitution due to a suspected hamstring strain. Hugo Lloris was called into action one more time by former Monaco midfielder Leko (84'). Released by Briand, Alex Lacazette almost got his name on the scoresheet but lost out to the Dinamo custodian. After two matches of the group stage, for a draw and now a win, OL sit second in the section ahead of back-to-back games with leaders Real Madrid.