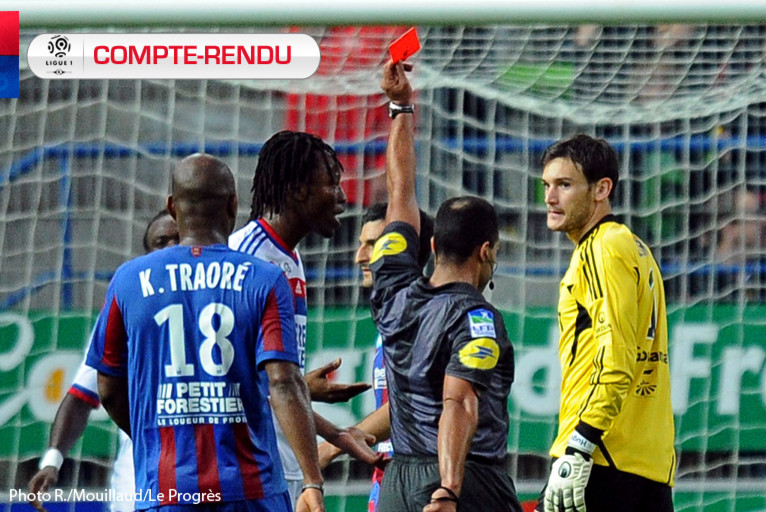 After the first-half sending-off of Hugo Lloris, there was no way back for Rémi Garde's charges and Lyon lost for the first time this season, 1-0 away to Caen...

Week 7 saw OL on the road to Caen looking to defend their newly acquired place atop the leader board in Ligue 1.

It was a slow start to proceedings and it took a good ten minutes before Michel Bastos's long-range effort flew high and wide of the mark, for a first shot of the match. Played in by Réveillère, Bafé Gomis created the first real chance of the game but was denied by the Caen 'keeper (15'). Goal-scoring chances were few and far between at the Stade Michel d’Ornano and the Lyon forwards struggle to find their usual understanding and interplay. Michel Bastos did, however, kiss the outside of the post with a free-kick (37'), before the match turned on its head. Released through on goal, Hamouma was brought down by Hugo Lloris and referee, Monsieur Ennjimi, awarded the penalty and brandished the red card to the OL shot-stopper. Bafé Gomis made way for Rémy Vercoutre, but the new custodian couldn't keep out Nivet's penalty (45'). At half time, OL trailed without firing a single shot on target.

The Normandy outfit dictated play at the start of the second half while Les Gones looked to strike on the counterattack and from set pieces. Things evened considerably when Nivet picked up his second yellow card and it was 10 v 10 for the final minutes. But Les Lyonnais never really looked like threatening, if not a deflected Michel Bastos free-kick that brought the best out of Thebaux in the Caen goal (84'). There was still time for Lacazette to draw another good stop from Thebaux, but OL were never at the races and deserved little more than they got at the Stade Michel d'Ornano.