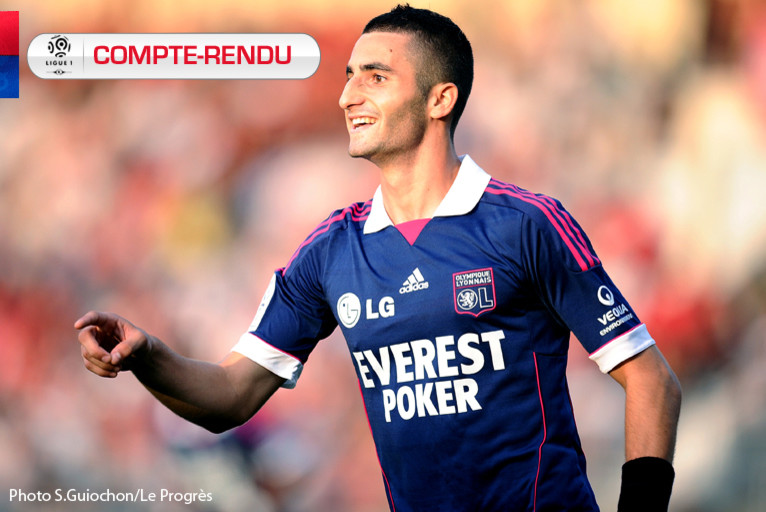 Olympique Lyonnais have made the perfect start to a marathon month of September by moving provisionally top of the Ligue 1 standings thanks to Saturday's 2-1 win over promoted Dijon.

Les Lyonnais were back in action after a two week international break that also coincided with the end of the summer mercato. It was a sell-out crowd in the Stade Gaston Gérard as Rémi Garde's side paid a visit to the Ligue 1 new boys.

Les Olympiens immediately imposed their rhythm on proceedings and fired the first shot in anger of the match via Sweden international Kim Källström whose 30m missile was somehow diverted from the top corner by DFCO 'keeper Reynet (2'). Just minutes later OL made the breakthrough, when Källström's corner picked out the head of Maxime Gonalons to open the scoring (7'). With OL in front, the scoring chances became a rarity and it was the impressive Max Gonalons who saw a great half-volley saved after a neat one-two with Jérémy Pied. Unfortunately, Dijon's first chance resulted in the equaliser. Jovial turned the ball into Corgnet's path and the powerful shot from just inside the box left left Hugo Lloris with nothing to do but pick the ball out of his own net (43'). The 16,000-strong crowd in the Stade Gaston-Gérard could celebrate as both sides headed to the half-time interval on level terms.

After the break, Les Gones wrestled back control of the game and carved out a number of scoring opportunities. Jérémy Pied was the first to find himself in a shooting position but elected to cross. OL was rewarded for their enterprising play when Bafé Gomis headed home a wonderful Michel Bastos cross (53'). Rémi Garde brought on Clément Grenier at the expense of the prominent Pied (70'). Bafé Gomis missed out on the chance to take the game beyond Dijon after another Källström centre (73'). Bastos and Gomis then got in each others' way from a corer as OL again failed to kill off the competition. And it almost proved costly as promoted Dijon had a great chance to equalise, only for Zarour to miss everything from an inviting position (79'). Kim Källström had the final shot for the visitors but Reynet was again equal to the task (86'). And it was the Burgundy side that could again have stolen a share of the spoils when Thil forced Lloris into a final decisive save after a quickly taken free-kick.
The final whistle confirmed the perfect start to a marathon month of September for Rémi Garde's men.