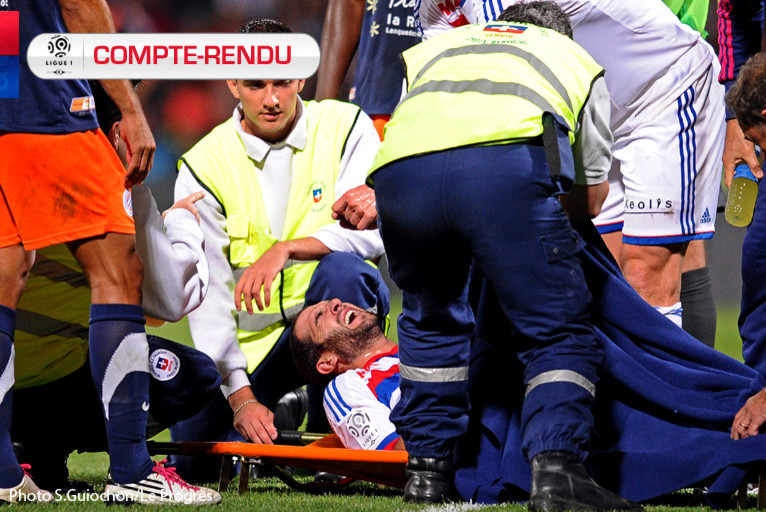 Lyon brilliantly won against the league leaders Montpellier but there are doubts over the health of Lisandro, taken off on a stretcher

Three days after qualifying for the Champions League, Lyon were back in action at home to Montpellier, the championship leaders. For this fourth round of matches in the Ligue 1 Rémi Garde took the gamble of starting his "first choice team."

The Gones clearly had their foot on the ball in the first minutes of play. Michel Bastos confirmed his form of August delighting Gerland with technical gestures and multiplying calls down his left flank. It was the Montpellier player Giroud who created the first clear chance with an acrobatic scissor kick pushed away by Hugo Lloris (10’). Rémi Garde’s players replied from a corner in the next minute with a header from Bako Koné which went just over the target. Giroud inherited a new ball behind the OL rear guard but the Olympian goalkeeper realized an intervention in two stages (12’). The Montpellier center forward had decided to give the OL defence a bad night. The Gones procured several interesting corners and free kicks but without taking advantage. Anthony Réveillère was the author of a fantastic defensive come back on Utaka and stayed a few minutes on the floor before getting up (26’). Clear opportunities became scarce after the half hour mark so much so that the two teams returned to the locker room on a scoreless draw.

Rémi Garde launched Miré Pjanic in place of Jimmy Briand at the start of the second half. The Bosnian did not wait long to change proceedings. Played off by Gomis, Bastos threw in a cross with the outside of his foot to Pjanic who scored from close range (49’). Gerland rejoiced. It was the first time this season that OL had led on the score line. Montpellier created an opportunity shortly after with a curling shot from Giroud picked up by Lloris. René Girard’s players pushed on harder and this brought about some good counter attacking opportunities for the Gones. The encounter took on a new dimension, it became end to end stuff. Giroud hit the woodwork at point blank range following a corner by Dernis (60’). Spirits ran high and Mr. Gautier began distributing warnings. Hugo Lloris pulled off an exceptional save from a Belhanda shot that was heading for the top corner (67’). Blows rained down from both sides and Belhanda was logically sent off for a bad gesture on Pjanic when he no longer had the ball (81’). A few minutes later OL killed the game with Miralem Pjanic, still pulling the strings, who crossed for Jérémy Pied to volley home with surgical precision (84’). After the euphoria, all of Gerland was worried seeing Lisandro writhing on the pitch. The Argentinean’s ankle remained stuck beneath Hilton and he was forced to leave the stadium on a stretcher. Montpellier took advantage of the last uncertain minutes to reduce the score thanks to a shot from Bedimo. At the final whistle Gerland was divided between satisfaction and concern for his Argentinean striker.