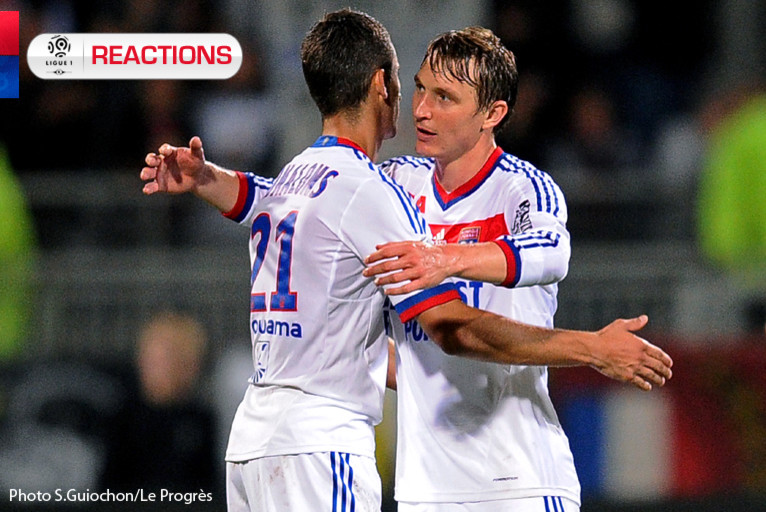 Jean-Michel Aulas
Lisandro has gone for an x-ray. He heard cracking at the bottom of his ankle. This injury tarnishes the atmosphere. Licha is a captain, he is the man who leads this team. Hopefully it gets better. This week is incredible in terms of results. Hopefully Licha’s injury is not too serious.

Jérémy Pied
We put in a good performance in the second half. We slackened off probably due to the injury to Lisandro. The crucial goals that can bring 3 points are always significant. I tried to bring a little something extra when I came on, just like Miré. This year there is a collective, we can always be disappointed not to start but you have to give the best service to the team when you come on.

Alexandre Lacazette
The last few days were aimed at recovery. It is with pleasure that we link up with the squad. The first half was quite difficult. I'm glad I trod the turf. We are divided: happy with the win but we also hope that Licha will quickly recover.

Robert Duverne
We are uncertain as to the injury of Lisandro. We will still savor the end of this first cycle. I think the train is on track, we worked hard for it. This match was not easy after the trip to Kazan. We’re taking each match as it comes. We had to win the match against the leader because we are ambitious. We are concerned today about Licha ... We have shown that we do have a killer instinct. There was great solidarity. The central defensive pairing was impressive in their interventions, there was selflessness in all registers.

Kim Källström
This may be our best player who is injured ... which somewhat spoils of victory ... We have worked a great deal, we were up against the league leaders after a complicated trip ... We showed a lot of character, took three points, it's very interesting for the continuation of the season. We have a lot of automatisms as we play a lot together. We knew we would be better in the second half, Miré and the other players who came on have contributed.

Michel Bastos
We are happy to go finish with 3 points. This Montpellier team gave us a lot of problems, fortunately we have a great Hugo Lloris. We expected a difficult match from the start but we managed the encounter well.

Rémi Garde
The results for the month of August are as we had hoped. This allows us to enter the Champions League and Ligue 1 in a good situation. For now I have no eyes on the rankings. There are other concerns at this start to the season. We had to restore confidence to the players. At the moment there has been a lot of investment from everyone. Traveling to Kazan was complicated and 48h after the team was able to seek out a victory and topple the leaders. The players who came on over the course of the game were decisive. They are part of a group and serve their team. As far as Licha is concerned we’re waiting for the results of the x-rays with a lot of anxiety.

René Girard (Montpellier manager)
I'm disappointed. It's infuriating to lose a game like this. There was the place to win. Small elements have tipped the game. I am very proud of my boys, they gave the maximum.