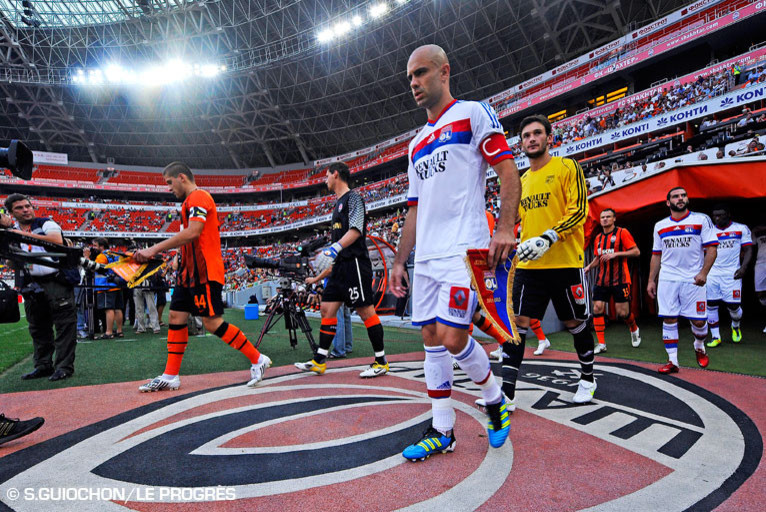 OL confirmed their improvement with a solid game against Shakhtar. Rémi Garde’s players came close to winning in the final minutes.

95’: The referee whistles the end of the match after five minutes of stoppage time. Lyon showed good things and might even have won the very end of game.

88’: Pléa tries his luck again. The pushes the ball away to Briand who misses the target by just a few inches...

86’: What a cannonball effort from Alassane Pléa! The ball heads for the top corner but the keeper punches the ball clear...

77’: Penalty for OL! Bastos is btought down and again the referee seems pretty complacent. Michel Bastos does justice himself and provides the equalizer for OL!

68’: Jadson sends Lopes the wrong way and opens the scoring.

67’: Penalty for Shakhtar! Lovren is penalized for having brought down a Ukrainian striker in the box. The referee's decision appears to be very severe.

60’: The youngster Alassane Pléa comes on in place of Belfodil.

56’: Jimmy Briand tried his luck with a left foot effort but misses the target.

54: Lyon have started the second half well but it is the Ukrainians who are dangerous with a cross from Fernandinho that passes in front of goal.

45’: In stoppage time of the first period Douglas Costa hit a free kick that flies close to the top corner of Hugo Lloris who was on the trajectory of the ball.

36’: Great opportunity for OL. Belfodil again made the difference on the right before serving Gomis. The Lyon striker sends the ball on to Lisandro who instantly strikes with the inside of his boot but the keeper pushes the ball away.

30’: Dentinho and Douglas Costa are moving around a lot and are causing a lot of worries to the Olympian defence.

26’: A great opportunity Lyon. Belfodil breaks through the defence on the right but his shot is blocked. The ball falls to Lisandro who follows up with a left foot shot on target, but the Ukrainian keeper saves.

15’: Dentinho tries his luck from around twenty metres but Hugo Lloris catches the ball without a problem.

14’: Good save from Hugo Lloris from a cross by Douglas Costa out on the left flank.

8’: Jérémy Pied and Bafé Gomis strike at goal but their attempts are not on target and are too far off to worry the goalkeeper.

3’: The Ukrainians are showing great control and are moving the ball around well. Lyon are trying to respond in the physical impact and move quickly forward.

The two teams enter the pitch. Lyon are in white while the Ukrainians wear their traditional orange jersey.

H-1: It is very hot at the Dombass Arena in Donetsk while the Lyon players discover the pitch.