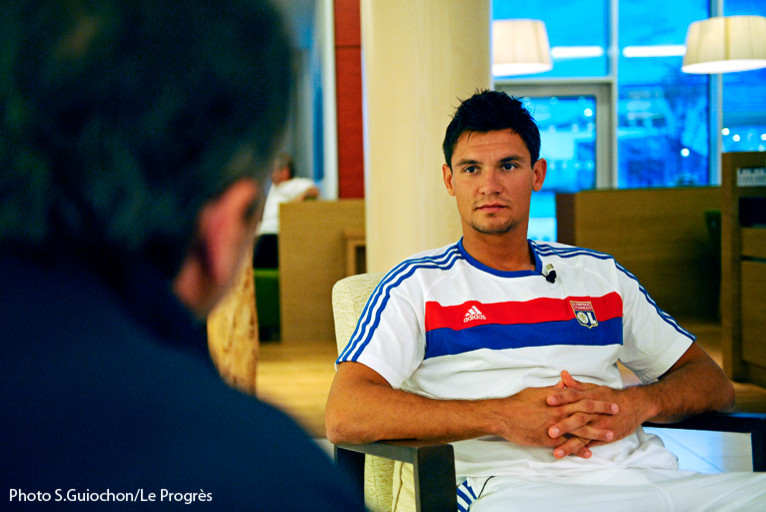 The Croatian defender was one of the satisfactions of the 2010-2011 season ... In a mix of French and English, he spoke of the past and the future ... Excerpts from an interview which you can see this Monday night from 19h00 in the programme Estival...

If he has made good progress in French to the point of understanding it without problems, he is still reluctant to fully express himself in the language of Molière. So he often begins his remarks in French before switching to English. Pretty cool for this young defender who has played 3,194 minutes. What a change from his 860 last year, recalling that he had arrived during the winter break. Dejan has already become in the eyes of many observers a first team player who has played alongside Cris, Diakhaté or Toulalan. "It has caused me no problems to change partners, although it is better to play with the same one. First team? When a season begins, everything begins again...."

Young but lucid, this strong fellow too often lost his temper on the field in 2010-2011. "I know. I have to stay calm. I should pick up these red cards. It was my fault. I lost my head at Auxerre ... I have to calm down. Off the pitch, I am laid back...." Rough although refusing the label of bad player, he says he loves the ball and feeling things, anticipating. He also said that Gameiro, Hoarau, Gervinho, Hazard ... were the attackers in the championship who impressed him the most.

He also said he was disappointed with the results. "At OL, it's not normal not to win titles ... We must do it this season ...." He also says he feels good with the OL shirt on his back. "At OL I have all I need to progress, to succeed... We will see later…." He finally said he'd like to score more goals. "When I go forward on set pieces, I hope to score, but I do not know why this doesn’t happen or very little. Maybe I'm out of luck...."

Returning from vacation 3 days after the majority of his partners because of his international obligations, he was happy to be reunited with the group. "I stayed in Croatia. I swam, played tennis, basketball ... it was good. The return to work? No problem, even if I prefer above all playing football ... I have not talked to Remi Garde. I know what he did in his career...." He concludes: "I now feel fully integrated into the team. I talk with everyone ... and I am progressing in my French without taking any classes...."