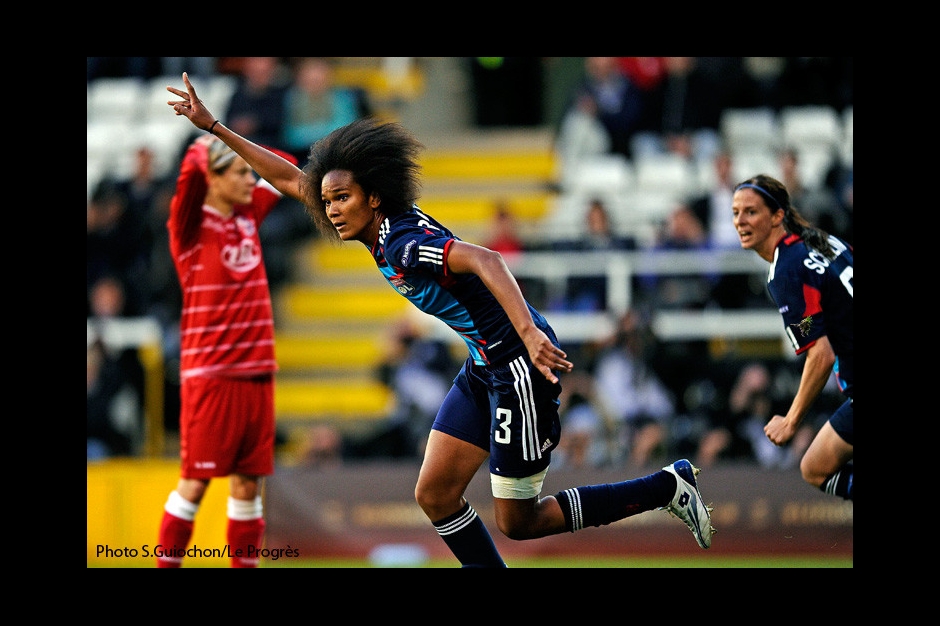 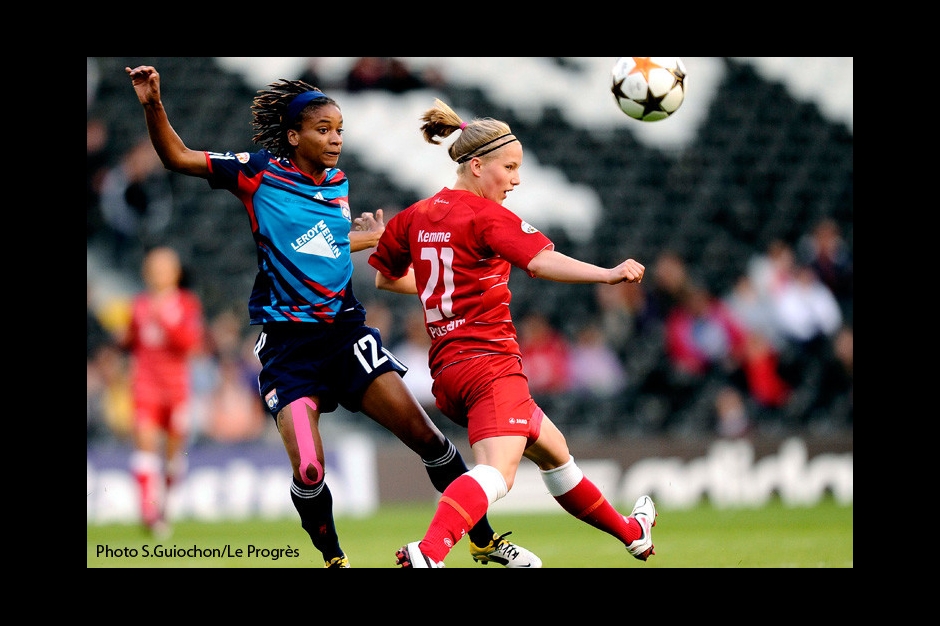 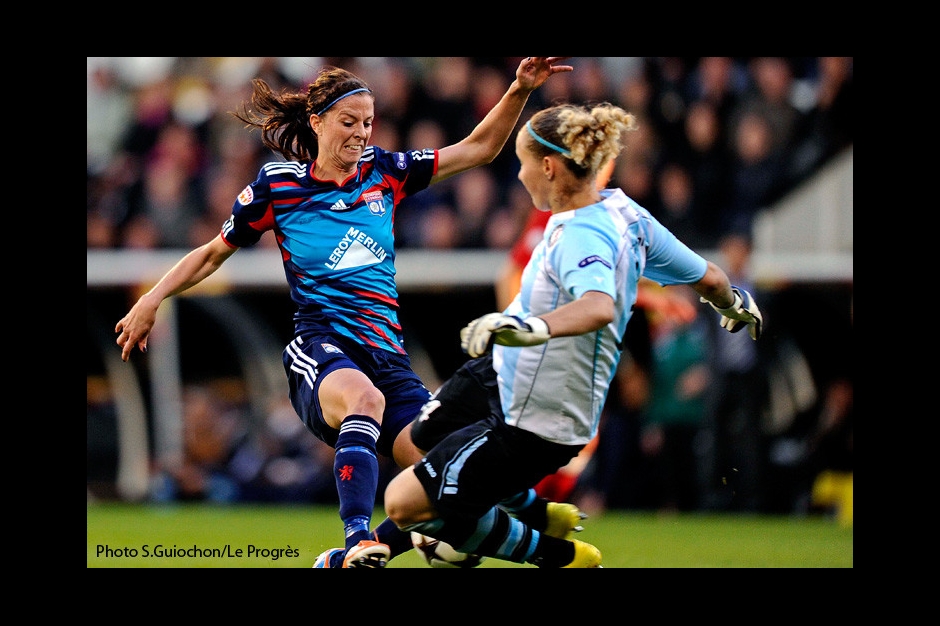 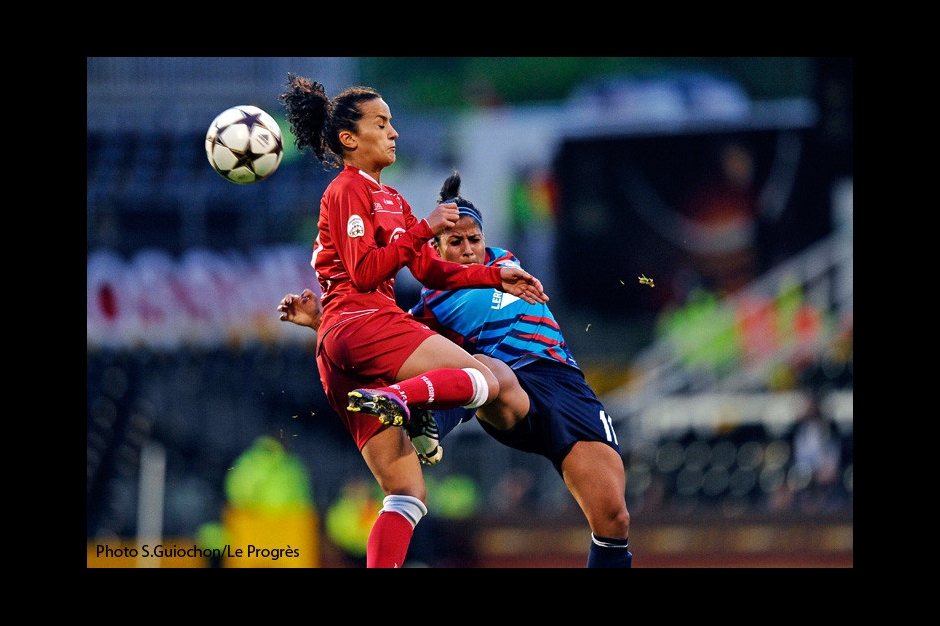 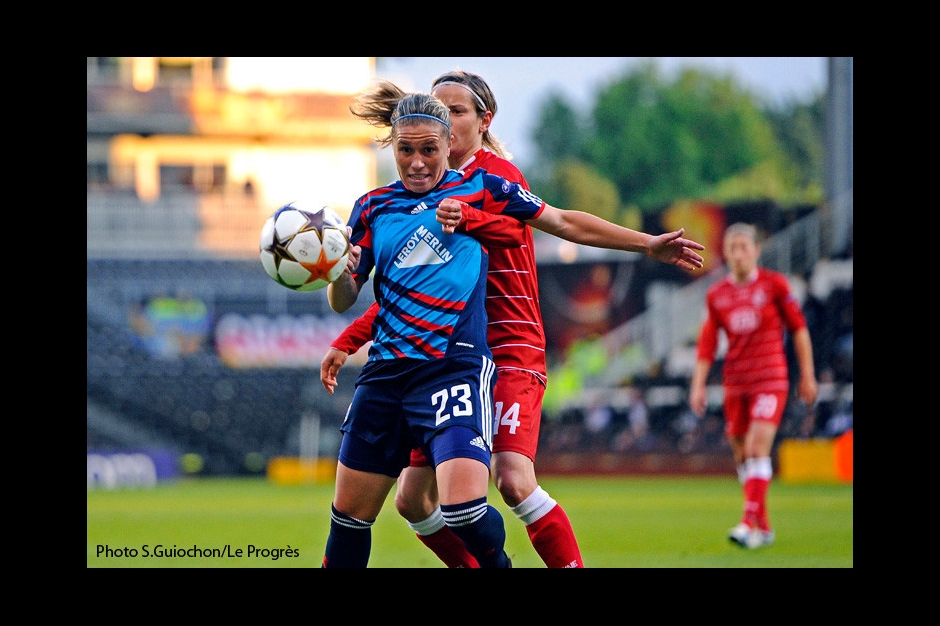 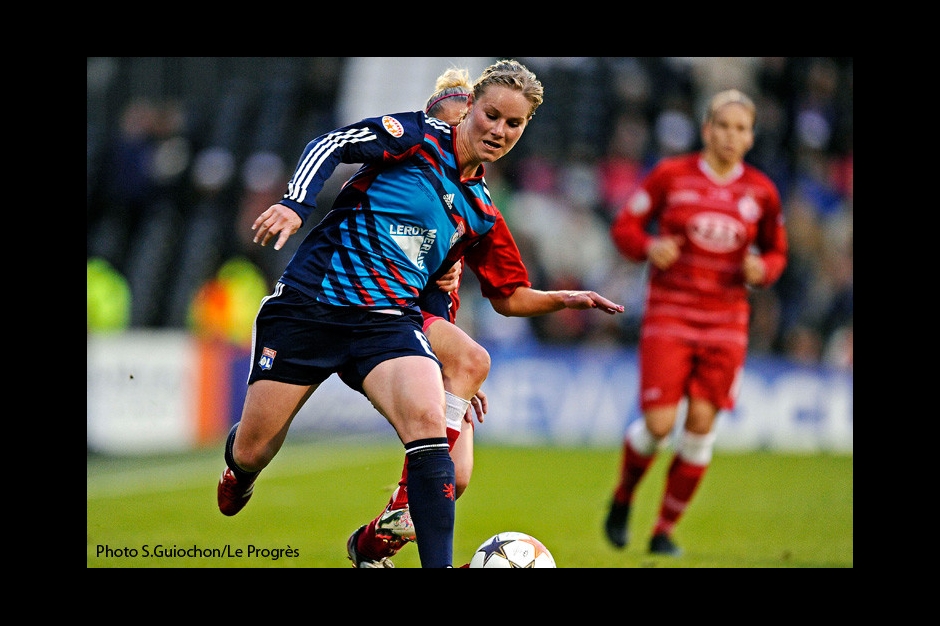 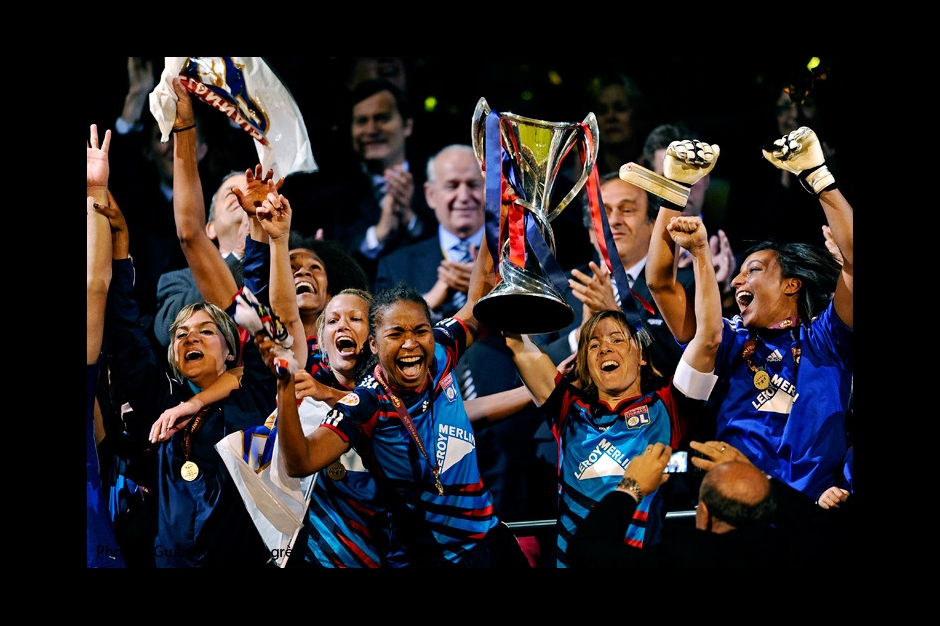 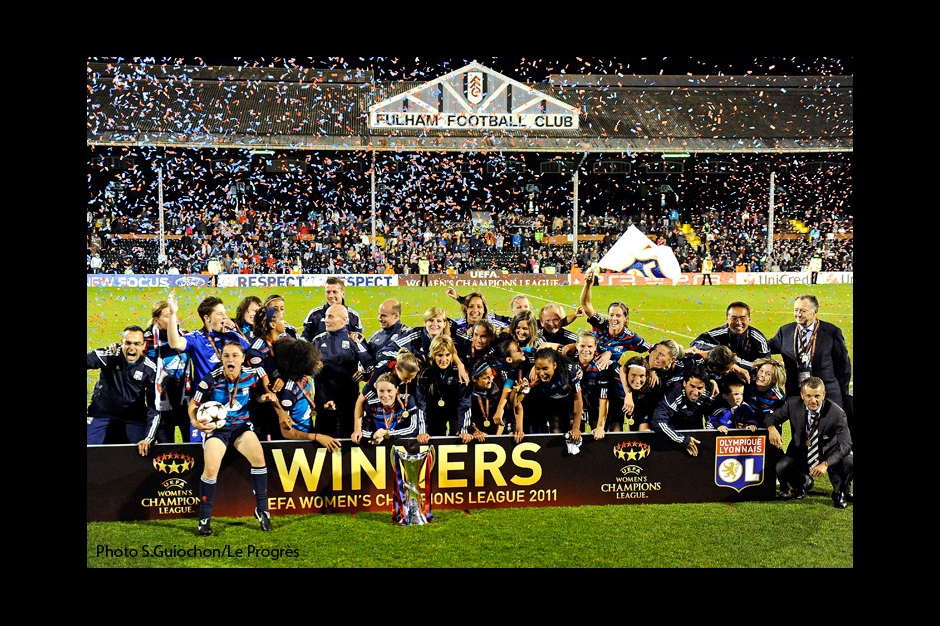 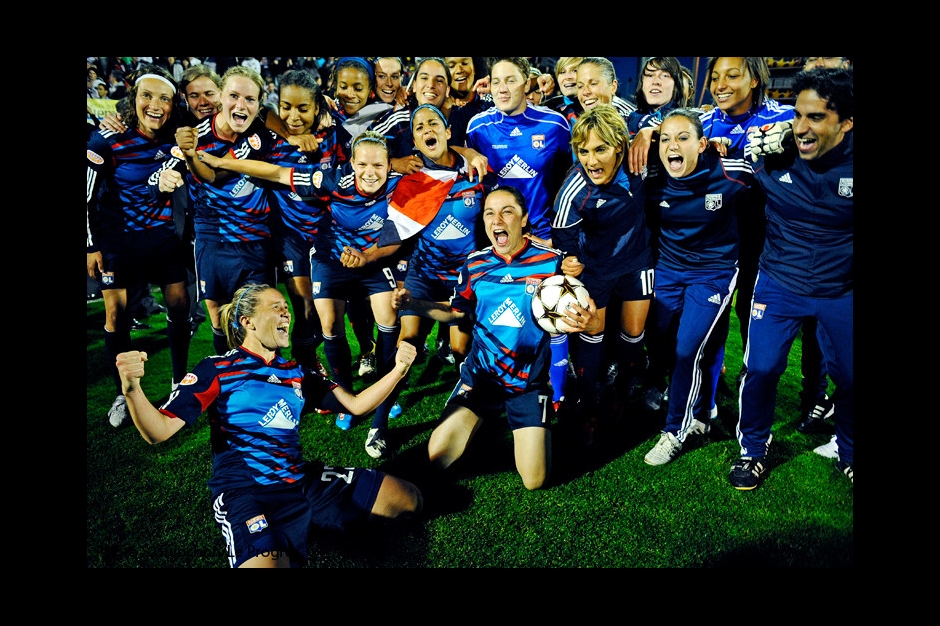 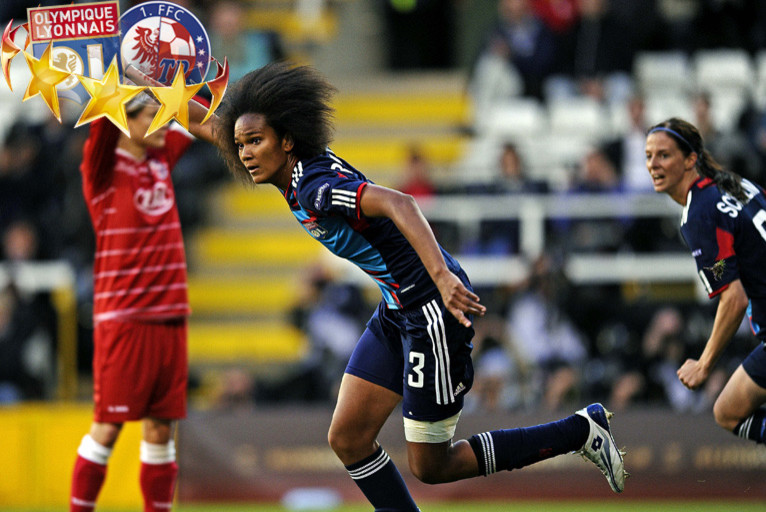 The Lyon women have done it: they are champions of Europe! After a game in which they appeared superior to the Germans, the rematch of last year this time turned in favor of Patrice Lair’s players, winning 2-0 (with goals from Renard and Dickenmann).

It was THE revenge, final, or rather THE final because the match between Lyon and Turbine Potsdam was held in London, at the Craven Cottage ground usually occupied by Fulham FC.

The game did not start in the best manner for Lyon. The Germans had the ball, passed it about and made Lyon chase it. And in the 5th minute, Bernd Schroder’s players created the first opportunity: a cross from the left landed at the far post for an unmarked Kerschowski, but Sarah Bouhaddi managed to divert the ball out for a corner. Then five minutes later, second alert: a deep ball arrived at the feet of Mittag, who managed to shoot but Sarah Bouhaddi saved again, but Mittag was flagged offside, a... nonexistent offside.

These two warnings at least had the merit of awakening the Lyon players who then managed to take the game to their account and even to hit the post from an inswinging corner by Louisa Necib (12’) or strongly worry Sarholz with a festival from Lotta Schelin on the right flank, who pulled inside and hit a left foot shot just wide (16’), or the shot from Camille Abily saved with difficulty (18’), or Lotta Schellin, still with her left (20’). And in the 27th minute following a corner kick from the right, hit to the back post by Sonia Bompastor, Henry knocked the ball back to Lotta Schelin who shot, but the ball was pushed away to... Wendie Renard who managed to put the ball into the net! 1-0 for OL!

The encounter continued unabated until half time with a few attacks for both sides which were, however, not very dangerous, just like the 3 against 2 missed by Elodie Thomis in first half stoppage time. At half-time, Lyon led 1-0 against a physically impressive German side, but, logically, more limited technically than the French.

The second period began just like the first, except that the night had fallen: with German opportunities, including a header (46’) from Kerschowski who, although unmarked on the six yard line, messed up her effort completely.

And after the hour mark, when fatigue was beginning to be felt and the spaces appeared, the Germans benefitted from a golden opportunity through Bajramaj who was alone in the box after a low cross. But she failed to take advantage.

Just like Mittag in the following minute, who unmarked - once again - three yards from goal, could not take advantage of an error from Wendie Renard. OL narrowly escaped twice in one minute. And while "Who does not jump is not from Lyon" rang out over Craven Cottage, Patrice Lair made his second change: Eugénie Le Sommer replaced Elodie Thomis (72’), shortly after Lara Dickenmann had replaced Louisa Necib (55’). The match took a strange turn: more and more space, few opportunities, but a kind of false rhythm.

And in the 83rd minute, Lotta Schelin, despite being a level above all the other players, missed making it 2-0 after having gotten in front of the German keeper after a cross.

But, two minutes later, Eugénie Le Sommer crossed from the right flank. At the far post, Lara Dickenmann picked up the ball, controlled with her right foot and followed up with a magnificent left foot shot into the top corner! 2-0 to OL!