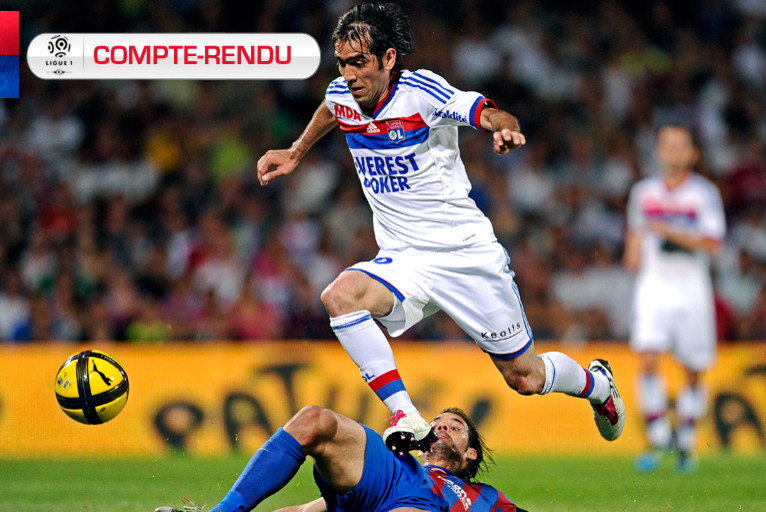 Lyon created many chances but endlessly broke on the Caen rearguard. Everything will be played for next Sunday in Monaco.

This final match at Gerland in the 2010-2011 season smelled of gunpowder before the kickoff. The Lyon supporters were divided between the uncomfortable position of OL in the standings and the desire to celebrate the last home game of the season.

In a very special atmosphere Lyon were the first to be dangerous with a cross cum shot from Aly Cissokho which hit the crossbar. Shortly after it was Ederson who tried his hand at shooting, but he missed the target by a few millimeters. The Gones had started the match well. Following a corner OL went close to opening the scoring but neither Lisandro nor Cris could find their way to goal (16’). This high point lasted about twenty minutes but then Lyon lost steam. Caen started to get into the encounter, but never really showed themselves to be cutting. Lisandro thought he had opened the scoring, but his effort was cleared off the line in two stages by the Norman goalkeeper (36’). Less than two minutes later the Argentinean saw a header whistle just a few millimeters from the top corner of Thébaux (39’). Claude Puel's players were not really rewarded for their efforts despite the accumulation of clear cut chances. However, the referee Mr. Buquet whistled for halftime with the match goal less.

OL continued to put pressure on the opponent's goal at the start of the second period. Lisandro was brought down in the penalty area but the referee played an advantage that did not benefit the Olympians (53’). Minutes after minutes Cris and his teammates continued to break on the Caen rearguard. Bastos and Pied came up against an impeccable Thébaux. When he cleared off his line the Olympians were clumsy in their reactions. Some of the supporters from Virage Nord decided to leave the ground as a sign of discontent (69’). On the counter attack, Franck Dumas players were close to crucifying the Gones but Aly Cissokho saved his team by throwing himself across the goal line. This new draw conceded at Gerland prevented Lyon from ensuring their place in the preliminary round of the Champions League.