OL present during the encounter 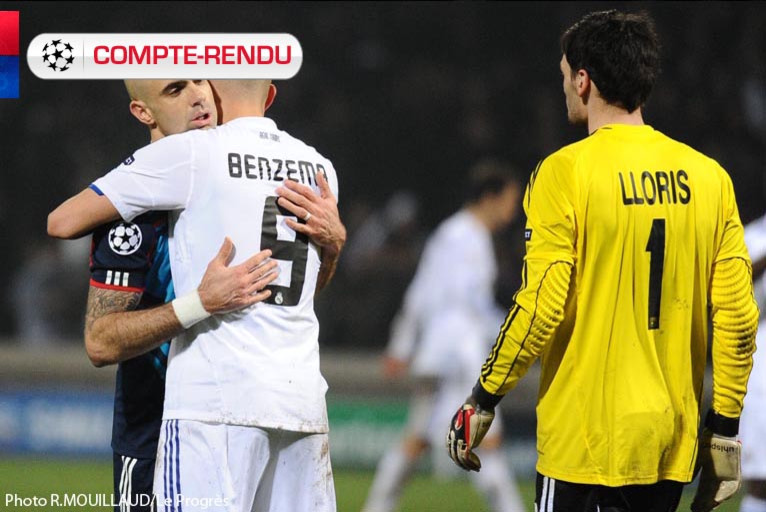 Authors of a great first period which was poorly rewarded, Lyon fell behind in the scoring after a goal from Benzema before logically equalizing through Bafé Gomis.

The atmosphere of the great evenings reigned over Gerland on Tuesday evening. And for good reason since OL faced Real Madrid in the first leg of the last 16 of the Champions League.

The red and blue flags fluttered in the four corners of the stadium at the entrance two teams. In a white hot atmosphere, Michel Bastos lit the fuse first but his shot does not find the target (4’). From the first minutes of play, Jose Mourinho was standing and pacing his technical area. Served by César Delgado, Cris had the first big opportunity of the encounter with an acrobatic gesture at the limit of offside. The Madrid defense seemed to have confidence especially with Pepe limit on a number of actions. Kim Källström then tried to shoot after a a beautiful combination but the Swede did not find the target (25’). Aly Cissokho and his teammates had clearly mastered their subject during the first half hour of play. Only a goal was lacking to make their dominance concrete and ignite Gerland. The crowd rose to their feet on a breakthrough from Chelito stopped at the limit of regulations by Sergio Ramos. A free kick from Ronaldo gave a little work to Hugo Lloris who had previously spent a relatively quiet game (31’). Following a rapid counter attack, Bafé Gomis took advantage of a ball dropped by Casillas to strike at goal but the keeper made amends by pushing it out for a corner (35’). This first period was well negotiated by Claude Puel’s players and even if the possession was in favour of Madrid, the best opportunities were Olympian.

Madrid decided to raise the tone early in the second half. Cristiano Ronaldo sent in a missile from a free kick right onto the left post of Hugo Lloris. In the next minute the Lyon goalkeeper this time was saved by his crossbar following a header from Sergio Ramos. After this Spanish fury, OL regained control little by little. Toulalan picked up a good ball in the box but was countered in extremis (58’). The sixty-fourth minute was cruel to OL. Gerland gave a standing ovation for the entry of Karim Benzema but he crucified his former club on his very first ball which he slipped between the legs of Hugo Lloris. Lyon were groggy. Miro Pjanic came into play and also tried his hand at shooting from his first ball but missed the target (78’). Despite everything, Lyon found the equalizer following a free kick from Pjanic well flicked on by Lovren to Bafé Gomis who fired past Casillas from close range (83’). Gerland exploded. The end to the game looked to be explosive and it was. Yoann Gourcuff and his teammates lay siege to the Madrid goal. The score however remained the same and even though it was rather in favour of Mourinho and his players, OL remain alive.