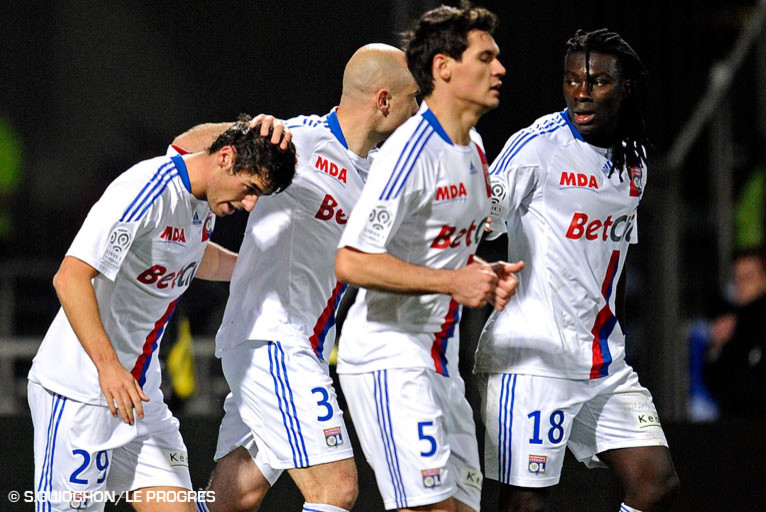 4-0, OL have given themselves a confidence boost in the best possible way before returning to the stars of the Champions League.

At the entrance of the players onto the pitch at the Stade Gerland, Cesar Delgado was celebrating his third start of the season. Jimmy Briand occupied the right wing, with Lisandro injured. Moreover, it is Remy Vercoutre who held the post of goalkeeper as Hugo Lloris was treating his nasopharyngitis and should have recovered in time to face Real Madrid in 4 days. Opposite, AS Nancy-Lorraine had refound their colours by putting an end to a series of four consecutive defeats in the league.

For 25 minutes, Lyon had not emerged against the Greens last week!
Work this week focused on starting matches and this time the instructions paid off well. An example? A lay off by Briand crowned by a shot from Gourcuff; Gomis's shot, following a cross from Réveillère, unfortunately countered and finally, Cris, twice, accentuating OL’s offensive animation without seeing the scoreboard evolve.

As for Nancy, they did not show much apart from an effort from Vahirua which went just inches over the bar of a Vercoutre well on his guard (20'). N'Guemo picked up a yellow card for having unfairly blocked Toulalan (26'). Then "Bafé", unable to find a shooting position, played the ball to Bastos who missed the target. A few seconds later, this same "Bafé" in exceptional form, escaped the vigilance of Sami and Andre Luiz to deliver a gift to Toulalan. The shot at the end of the marathon mans run flew the wrong side of the post (32'). And then the inevitable happened, a combination tried out several times in training as well as early in the game, which flew true thanks to the right foot of Gourcuff. And it is that untenable Gomis, like a Joachim Noah on centre stage, who again provided for Toulalan. An short observation period and the OL midfielder set up Gourcuff perfectly. The international sent a volley flying into Gregorini’s goal (37'). Before the two teams are returned to the dressing room, Berenguer was shown the yellow card by Mr Thual and Vercoutre took the upper hand on Hadji who tried to be clever from a penalty.

At the start of the second half, a back pass from Haidara under pressure from Briand turned into free-kick for Lyon just 6 metres from the goal of Gregorini. Gomis took charge of sending a rocket into the Nancy wall ... in vain. The goalkeeper then set about miraculously stopping a Briand strike from close range (55'). Time for change: Cesar - Bastos (57'). Gomis - Pied (69'). Two changes that proved to be winners when Jeremy Pied headed home a cross from Michel Bastos (76'). Gourcuff was able to rest, with Pjanic coming on to replace him (80'). And like the two substitutes before him, "Miro" brought his contribution, scoring after a pass from Briand (86'). The end to the game got even better when the former Rennes player managed a magnificent scissor kick to round off the evening at Stade Gerland in ecstasy (89').

4 goals ... OL have given themselves a confidence boost in the best possible way before returning to the stars of the Champions League against Real Madrid on Tuesday night at the Stade Gerland. 4 goals ... and we want MORE!