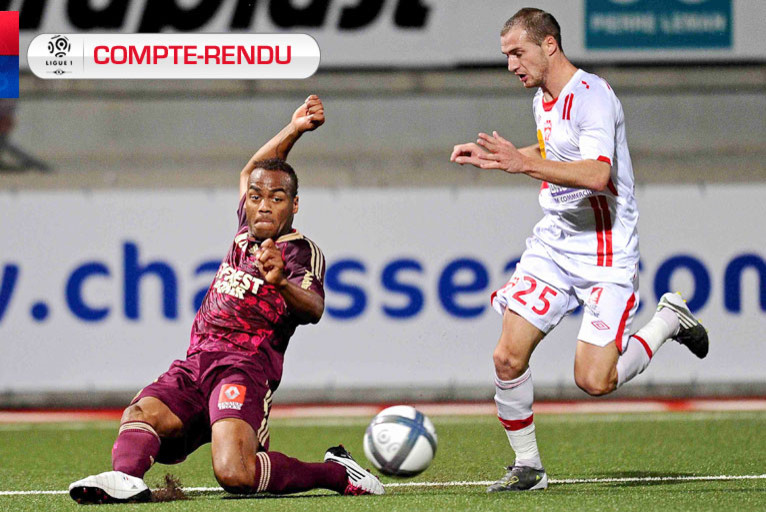 OL are out of the relegation zone. In a completely crazy encounter, OL did nt have an easy time but managed to bring home all three points.

Good news! Cris and Makoun were on the bench, Lisandro in the starting line-up. The treatment room is now almost empty. A night firsts... First start for Pied, first goal for Lisandro, first double for Briand... first goal at home for Nancy...Summary ...

First scare for Toulalan, who had to go off for a few moments for treatment before returning to the pitch of the Stade Marcel Picot. Vahirua did the same but was not able to return, being replaced by Bakar, who made his entrance without having the time to warm-up.
This latter was not slow to come to the fore. Just beating the offside trap, he forced Lloris into diving at his feet to recuperate the ball (11’). It would again be Bakar, who obtained the first shot of the game, pulled too wide to worry his rival keeper, who had come out on top a few seconds earlier.
Possession of the ball was controlled by Lyon but opportunities fell to Nancy. A powerful shot from Hadji. A left foot effort which went over from Gourcuff (28 '). Feret headed wide of the target (29'). Gonalons hit an effort which was a danger to nobody (30').

Finally something concrete! Excellent work from Gourcuff and Briand bringing the ball into the path of Lisandro. The Argentinean finished the job the best way possible: a side foot effort (37'). A goal straight from the training ground.

The start of the second period was in favor of Nancy who were seeking to quickly turn the tide. This Nancy side who have not been able to offer three points to their supporters at home this season. It's not for lack of trying, in the image of Hadji, who ran deep and backheeled the ball to Brison. At the edge of the area, the left winger stung the gloves of Lloris, the ball fell to Feret missing the equaliser from level with the penalty spot.
A new combination between Gourcuff and Pied from a set-piece hit the target. The cross from Pied was headed home by Briand who opened his account with OL (55', 0-2). Lyon have found this success which had fled them in the Ligue 1. But Lyon did not have time to savor their advantage as Nancy scored their first goal of the season at home. Andre Luiz majestically heading home a free-kick from Feret to reduce the scoreline (1-2, 58')

Nancy lifted their game and Lyon stood up to them, with their guts ... and the sacrifices of Gassama and Diakhaté in front of the goal of Lloris. Julien Feret, took advantage of Lloris coming out to face Bakar to volley home the ball and make up for the lack of clarity that he had shown a few minutes earlier (2-2, 70').

Lloris prevented Hadji from scoring a third goal (72'). As for his Nancy counterpart, Nancy, he completely missed the ball, which would benefit Briand in a crazy, crazy, crazy game! (2-3, 75'). After a number of opportunities for Nancy to make it 3-3: Brison (90 '), Bakar (91') the referee whistled the end of the match.