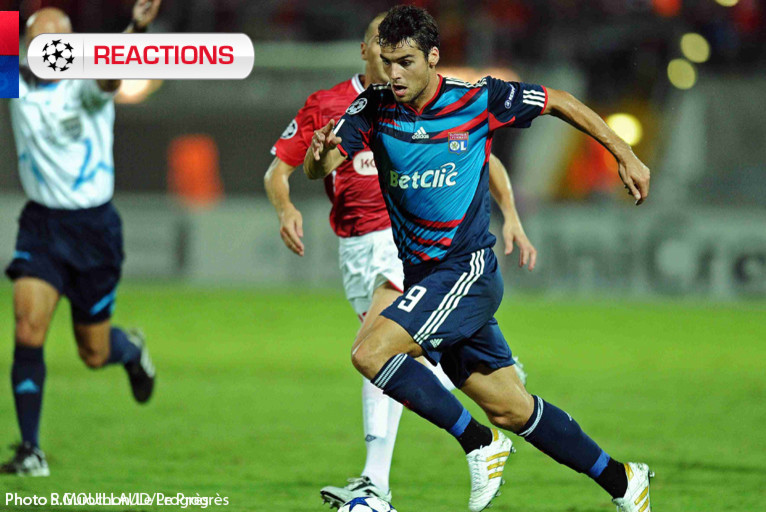 Jean-Michel Aulas
It was very hot. The second half seemed very long. The penalty gave the Tel Aviv a boost with their formidable public very close to the ground. This victory was essential. The conditions were not evident. Now we are leading our group. We did not put in a great performance, we know, but it was a big step forward. We had to get back mentally after Saturday's game. Our club is still on its feet because we have great fans and great players.

Michel Bastos
I was scared because I felt that a pull in my leg but it was a cramp. I am fully fit for the next game. I am proud to have helped my team by scoring a beautiful goal. Now we want to move on. We know that when we want we can do great things. Today we saw the strength of our team and it feels good.

Rémy Vercoutre
We will remember the victory because it was important tonight. The penalty kick we were awarded at the start of the match liberated us. They were expecting us and there was a warm atmosphere. I think more than a few teams will come up short here because they are a good team with a red hot group of supporters. Smiles will light up our faces and that is so much the better for the future.

Jérémy Pied
I tried to bring a little something extra offensively because everyone was a little tired. The heat was oppressive. We pretty much controlled the game as we managed to put three goals past them. For the third goal I was brought down but the referee did well to leave us the advantage because it has benefited Miro.

Claude Puel
The humidity was incredible. We were no longer used to this type of weather. It was good to open the scoring quickly and score a second goal not long after. We had a great team which continued to push on throughout the match. We cannot be too greedy because we have come away with three points and it is a good result. We had a good game against St. Etienne and were in the continuity of this performance. Now we will prepare the next game which is important.

Pape Diakhaté
We scored early on and it reassured us. We controlled the game as we were able to accelerate when we wanted. The downside is the goal that we conceded. They pushed but we had a grip on the game. Tel Aviv were not able to be very dangerous, we countered them. We come out of this second game as group leaders. We must continue working.

Kim Källström
It was a weird game, played at a slow pace. It was difficult to make any efforts in this heat. We were well in control until the penalty that was pointless to give away.